Over the years advances in technology have helped athletes, in one way or another, to optimize their training and recovery to maximize their performance. Today we see normal things that not many years ago were pure science fiction. This is what is going to happen in the not-too-distant future with SupersapiensToday it seems like an abstract concept reserved for the elite, but in a few years it will be a technology that any age group can handle to maximize their performance as well.

A few days ago I made a collaboration with Triathletes in Network with a video talking about Supersapiens (which is the one you have in the header of the article or that you can watch in his YouTube by clicking here). I want to accompany this video with a small text guide to help you understand the technology and comment on some details that are not covered in the video.

Supersapiens is a platform, not a specific product. The technology is based on Abbott's glucose sensor, and Supersapiens is the application that receives the data collected by the Libre Sense sensor.

It is originally a sensor intended for diabetes patients for constant monitoring, but Supersapiens sells their own which are the ones that can be paired with their app. To be clear, it is not possible to buy a Freestyle Libre 2 (which is slightly cheaper) and activate it with Supersapiens. Although they have been developing the technology for many years, it has not been in the news until now. Now we know them because they are sponsoring many events of the Ironman circuit (Kona without going any further) and collaborating with athletes such as Jan Frodeno, Kristian Blummenfelt, Eliud Kipchoge, the Ineos cycling team...

Behind Supersapiens there is a lot of money invested. In the last round they received around 13 million dollars from investors such as Zwift or Wahoo.

Supersapiens is a sensor that is placed as a patch, usually on the back of the arm. It has a filament that is inserted under the skin and is the one that takes the records. 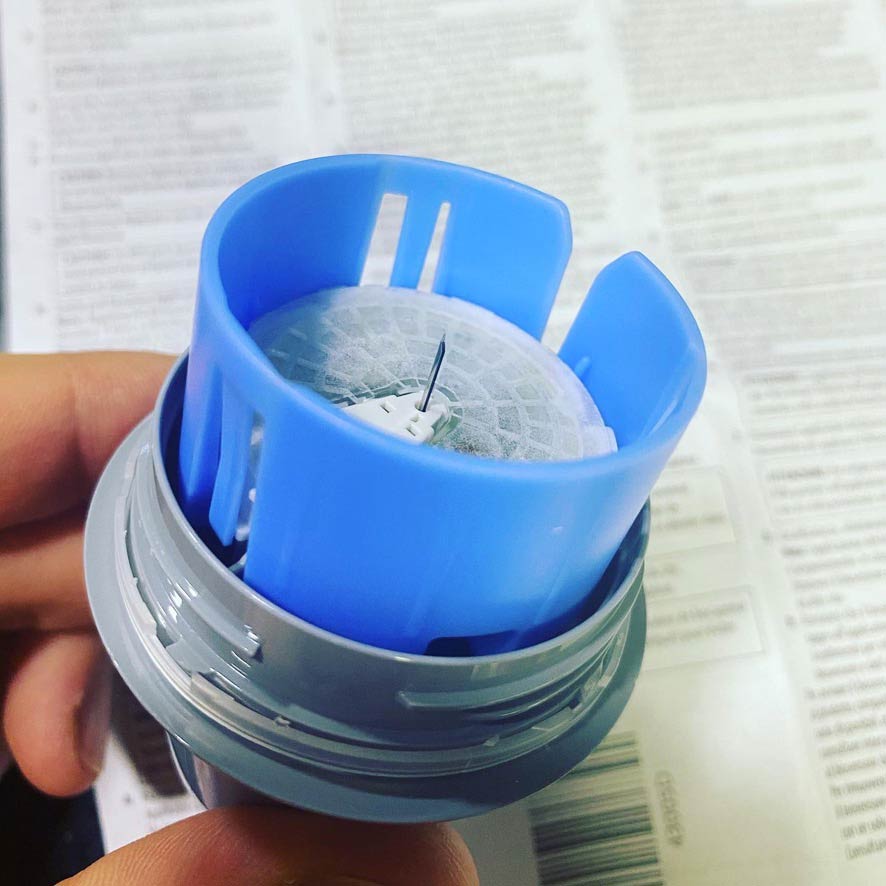 The package comes with an applicator that fixes it with adhesive. Although we are talking about a filament, the application is not painful, it is not like sticking a needle. It is water resistant so there is no need to be afraid of the sensor, neither with sweat nor when swimming. 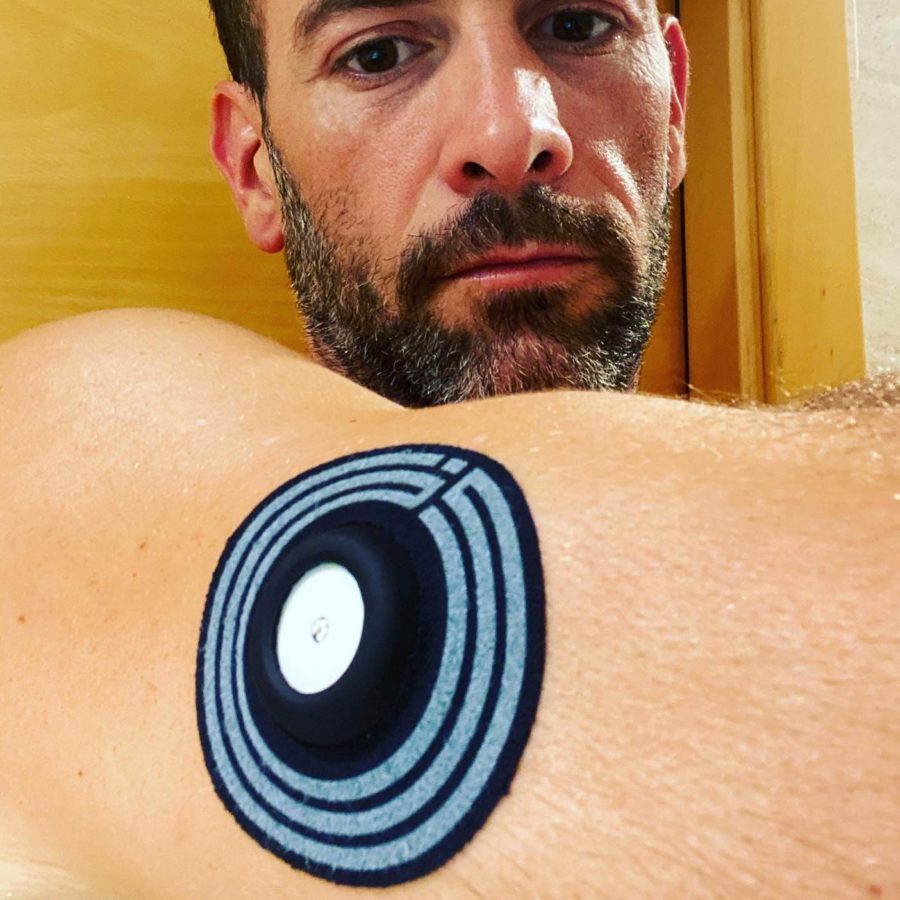 In terms of technology, the sensor incorporates NFC, Bluetooth and an internal memory. Once the sensor is placed on the skin we must activate it via NFC. The Supersapiens app itself guides us through the process, but we simply place the phone over the sensor and it will activate it.

Once activated, the duration of the sensor is exactly 14 days, not a second longer. After that time the sensor is deactivated. Something totally logical because the sensor is originally focused on diabetes patients who cannot remain without records even for a single second.

The sensor transmits the data via Bluetooth to your phone. It takes a record every minute and this is what we will see in the app. Here you can see a very detailed graph during the rest period (you can see "recover" in the top tab).

What happens if we don't have our phone with us? The sensor will continue to take records, although more spaced out. Every 15 minutes it will save the record it makes in its memory and, when we are near the phone again, it will download all the information. 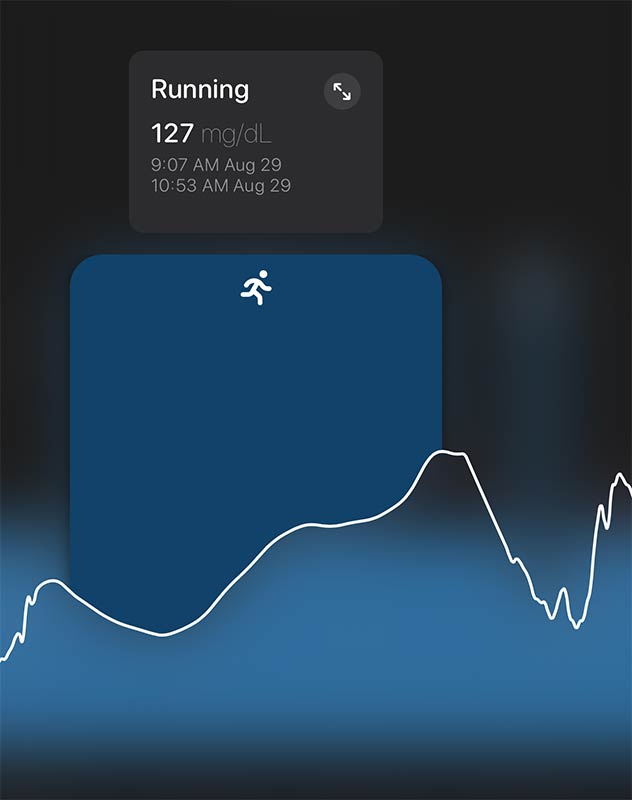 By the way, in that workout I took two gels, those are the peaks you can see in the graph.

The interesting part is not what poder see after synchronizing, but poder do a real-time monitoring. Of course there is the possibility of the mobile application, valid for day to day but far from optimal when we are talking about sport.

Without having to be looking at the mobile screen there are two other options. First, and the one that may appeal to you the most, is directly to a Garmin device. To do this you have to install a Connect IQ data field. 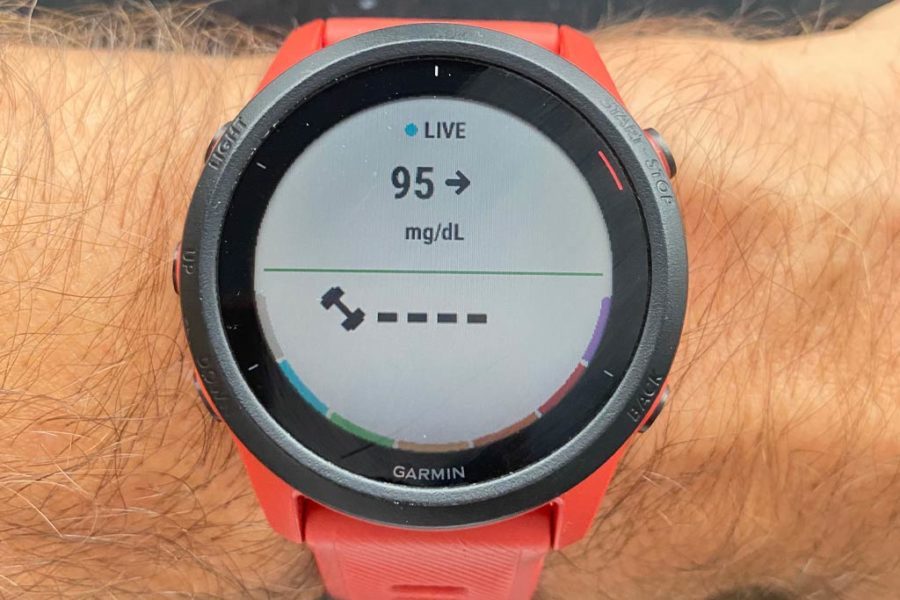 However, there are two problems. The first is that there is no direct communication between the sensor and the watch or cyclocomputer, but we have to use the phone as a bridge to transmit the information. That is, the sensor transmits to the phone and the phone to the Garmin device.

The second problem is that between all this bridging, communication is lost quite constantly and there are many times when we will find ourselves without poder seeing real-time data because communication has failed.

There is now another option: to pay cash. Supersapiens has just launched Energy Band, its own "wearable". In this case the communication is direct with the bracelet and we do not need to use a phone as a bridge, but obviously it has a cost and it is one more device to carry and that we will have to recharge. 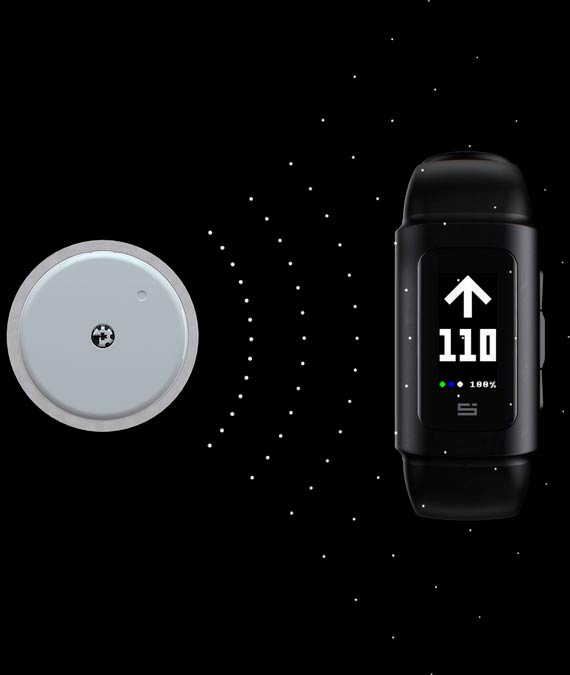 Another thing we don't have either (at least for the moment) is the possibility to write the glucose measurement data to the FIT file of the activity, not even using the Supersapiens data field. This would be a very interesting extra because 1TP10We could see graphs of power, heart rate, pace, etc. compared to glucose levels and see if the drop in performance was due to lack of energy or accumulated fatigue.

Perhaps you are not yet clear on what Supersapiens measures and how podemos can take advantage of this data. The sensor measures blood glucose in real time. Glucose is the main source of energy, we want the levels to be high because it is the fuel we are going to use.

Glucose is stored in muscles and liver. When the body needs energy and what we have stored in the muscles is used up, it is the liver that carries out a process called glycogenolysis to transform glycogen into glucose and keep the body functioning.

On the contrary, if there is a glucose spike, it is the pancreas that has to work to counteract it by releasing insulin.

As you can see it is a roller coaster, the body is not a perfect machine capable of supplying a constant amount of glucose.

The goal is to always stay in the appropriate range (which is not generic, it can vary between individuals) and without high peaks. If in the middle of a workout we take a sugar pump, glucose will tend to shoot up, when the body detects it, the pancreas will release a lot of insulin to counteract it, which will cause glucose to drop sharply.

This taken to a training or competition is a feeling of sudden euphoria (when the energy arrives), but which will soon be followed by a very deep "pit" because after the insulin is released the glucose has dropped too low, leaving you without energy.

Supersapiens will allow us to train a nutrition strategy, see what works for you at a given intensity and poder graphically see the sensations you are having throughout the training.

For example podhen understand how long it takes for a gel to take effect (in my case 15 minutes), how long its effect will last and what the glucose spike it causes is like. And from there, calculate how long after that you should take the next energy intake to try to make your glucose curve as flat as possible and avoid that constant rise and fall.

Obviously it can be a great help in long distance nutrition. But keep in mind that there is no one rule that applies to everyone equally, nor will it be the same at all times. We often read that 90 grams of carbohydrates per hour is the figure we should aim for, but that may be too much or too little depending on the individual. The sensor and the app provide data; but then you have to process, understand and analyze it. Supersapiens is not going to tell you "take this gel every 22.5 minutes and you will never have problems".

But to prepare that nutrition strategy it helps to see graphically how a gel takes about 15 minutes to work, with a fairly gradual glucose drop. A Coke has a quicker and more pronounced effect, but it is very short and the body eliminates that spike quickly.

The future of Supersapiens

When I speak of the future of Supersapiens, I am referring to this and the other products that will come from the competition, since the Abbot sensor is not the only one on the market, although it is the one with the most funding.

At present, its use will be very limited. Due to its price - €150 per month and not available in all countries - it is only available to a few. They are data to which we are not accustomed and we need a learning curve that is quite steep at first. In addition, its use in competition is complicated unless we have the Supersapiens Energy Band, because not in all sports 1TP10We will be able to carry the phone with us. In triathlon it would not be possible, but it is possible in ultratrail.

This is something that happens with every technological product. At the beginning, the selling price is high and only the "early adopters" can afford it.

But get used to these kinds of patches and start to get a good understanding of how it works for a nutrition strategy, because in the medium term it's going to be very common at the aspirational age group level. The price will come down and compatibility will become a standard. If Wahoo has invested money in Supersapiens it wasn't for the love of it, I don't think it will be many years before 1TP10We can see glucose data directly on one of their watches or cycle computers.

Don't forget to watch the video! And you know, if you have any more questions, there are comments below where you can ask your questions. VIDEO - Learn how to use power in the race | Chapter 3 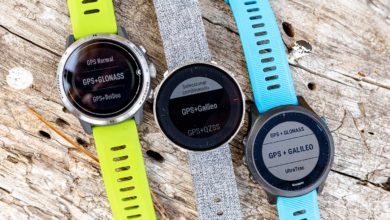 GLONASS, Galileo, BeiDou and QZSS | What it is and when to use it How to properly tie a running shoe 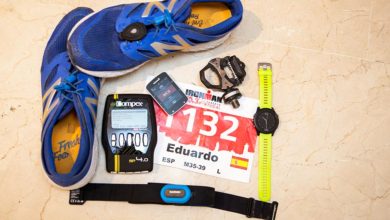 Things I used on the IM70.3 Portugal and how it was configured