The Endorphin range has put Saucony back on everyone's lips for its good performance and performance. It consists of three models: Shift, Speed and Pro. With this year's renewal, they have been renamed Shift 2, Speed 2 and Pro 2. This was to be expected.

The Saucony Endorphin Speed 2 in this test is the intermediate model of the range. A mixed shoe focused on fast trainings or, why not, also competitions. The recipe is the same: PWRRUN PB foam and nylon plate, leaving the carbon reserved for the Pro 2, a model that is clearly for racing.

If you prefer to watch the video analysis you can click here or watch it below. It is not a substitute, but the video provides information that is not available in the written analysis and vice versa.

With respect to the original model, the changes in the Saucony Endorphin Speed 2 are in the upper, although beyond aesthetics they are not very noticeable.


It is constructed in a single piece of mesh with good ventilation. The construction is simple and there are not many elements to highlight, it stands out enough for its striking aesthetics. 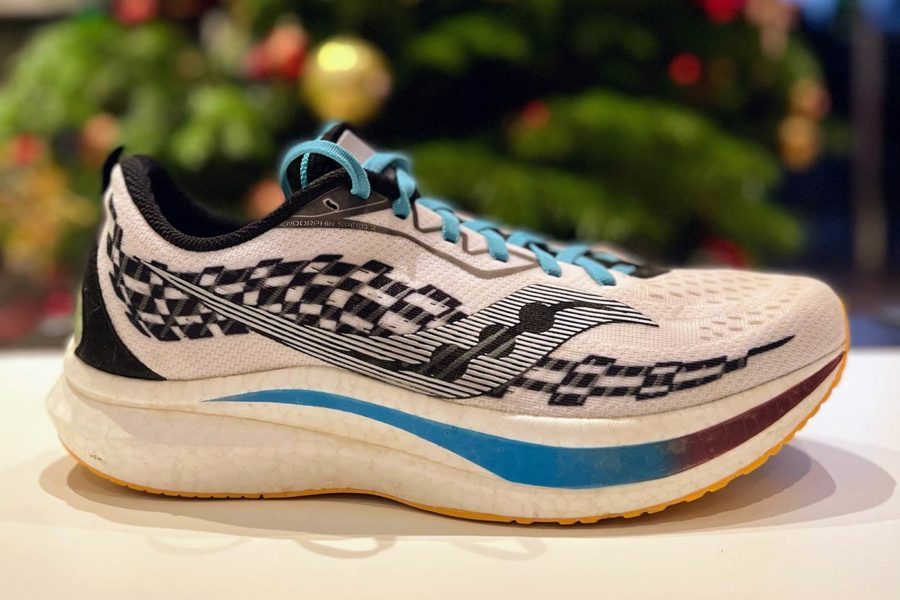 The fit of the mesh is good, leaving the foot subject but at the same time leaving space in the toe area. There is no feeling that the foot is imprisoned and at the same time once the laces are tied it does not dance inside the shoe.

The tongue is slightly padded on the upper, just where we close the lacing. This tongue is independent of the mesh, but is attached to the midsole by two elastic straps. It is comfortable and does not move when running or present any difficulty when putting the shoe on (I am thinking of duathlon or triathlon transitions). It also has a new pull tab to help fit the shoe, something that was not present in the first version of this shoe. There is also a small puller on the heel part. Just below that puller we have a rigid piece that completes the structure of the shoe. It is finished in a silver-colored imitation leather, but actually the size of this plastic piece is somewhat larger. Its mission is to maintain the shape of the shoe and at no time presents any discomfort or chafing on the foot. The collar is not very detailed. It is padded and very basic, but it fulfills its function perfectly. In short, it is a comfortable, lightweight, practical and well ventilated upper. That's how you want an upper to be, right?

There are no changes in the midsole from the first model, which is good news. It is made entirely with Saucony's PWRRUN PB foam and has a nylon plate inside to give a bit of boost, but still remaining flexible.

It has a front design with a clearly marked rocker. It is what Saucony calls "SpeedRoll". This shape of the shoe makes the transition quite smooth and, combined with the nylon plate, makes for some momentum in each stride. The drop is fairly standard, with a difference of 8mm from front to rear.

The PWRRUN PB foam is reactive although it doesn't reach the rebound capacity that Nike's ZoomX can have. Nike's foam feels much more bouncy and special. But that doesn't have to be a bad thing, in return it's a foam that offers a lot of stability. And this is what makes the Saucony Endorphin Speed 2 such a good shoe. Despite being a mixed shoe it is one of the most versatile shoes on the market. It works perfectly at any pace you want to take it to. Today without going any further I did a run with them with a warm up of 15 minutes over 5 min/km, then running at sub 4:00/km and 5:30/km rests. At no time the shoe feels strange, no matter the pace at which we take it, its behavior is great at all times.

At easy paces it's a stable shoe that doesn't give any scares (the same can't be said of Nike's ZoomX), but when we increase the pace the shoe responds perfectly, and its lightness and the small response of the nylon plate are noticeable.

Although for my taste, or rather for my weight (I'm over 90kg), it is short on cushioning. After an hour of use the discomfort begins in the impact zone, which in my case is the midfoot. Up to that point I have no complaints and everything goes smoothly, but after 50 or 60 minutes the discomfort starts to become noticeable. And the days that I have reached 1:20 or 1:30 with this shoe have ended up being a real torture.

This is something that, for example, does not happen to me with the Tempo NEXT% by NikeI've seen from other users that this is not common (it can happen with the Pro, which are stiffer because of the carbon plate), so I have to put it down to the fact that they don't adapt correctly to my weight.

So they will be reserved for interval days or maximum distances of 10km, but anything more than 45 or 50 minutes of use will definitely make me think about any other shoe.

The sole of the Endorphin Speed 2 is neither good nor bad. It just "is". It does its job in the dry, it is not designed to leave the asphalt and in the wet it lacks traction. 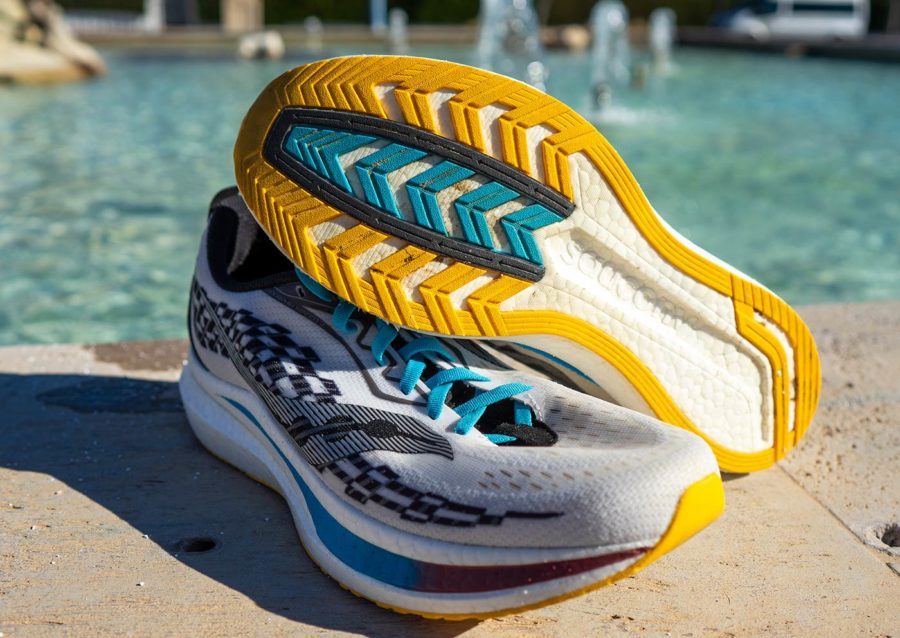 In its favor I can say that it is reduced to the minimum expression. Enough to separate the PWRRUN PB midsole from the asphalt and for it to wear out, but at the same time quite light precisely because of its reduced size.

However, by reducing the rubber part of the outsole so much, the midsole is completely exposed. This makes the Saucony shoes suitable only for running on asphalt.

By the way, you get an additional 10% off at RunningWarehouse by using the exclusive code CUMAR10.

The Endorpin Speed 2 is a very good performance shoe that is primarily intended to be a fast, mixed shoe, but in reality can be used in virtually any circumstance.

From light outings to fast intervals, to high-paced outings or even competition. Versatility, that's the word that best defines these shoes.

My only complaint is the aforementioned lack of cushioning for my characteristics. In short distances I am perfectly comfortable with them, but anything more than 10 kilometers would force me to seriously think about another model.