Español
The complete analysis is already finished. So if you are interested in knowing all the details of the watch, I recommend you to read the review of the Polar V800.

I just got it. After the TomTom Runner Cardio on Polar V800 will be the next device to undergo a thorough test. You have a few days (weeks!) of running, cycling and maybe some water (maybe, because the water is already cold...) ahead of you, to squeeze it into the 100% and then be able to tell in detail how it works.

The Polar V800 stands out in two ways. The first is that it includes an activity monitor in the watch itself. In fact, it was the first to include one, and soon we will have the Polar M400The newest addition to the range is the newest version, which also has this feature.

The second important detail that makes the Polar V800 stand out is that it is a fantastic GPS watch, but with eternal promises. Polar has announced a multitude of new features for the device and has set deadlines for new features and functions, although they have not always been accurate with the announced date. We can draw a positive and a negative reading from all of this. The positive one is that Polar is concerned with improving its top-of-the-line device and adding new features to it (without knowing exactly when). The negative reading is to have the feeling of buying an unfinished product and in "beta" state.

But for those who don't know the model, I'll tell you briefly what this model offers. The Polar V800 is a GPS watch designed for triathlon, covering all three sports (swimming, cycling and running). Made of stainless steel with aluminium buttons, black and white display with Gorilla Glass for protection and a 128×128 pixel display capable of showing 4 data during training. It has a barometric altimeter to measure altitude, inclination and descent and ascent, perfect for cycling. And all this in only 79 grams of weight and less than 13mm thick.

It has Bluetooth Smart connectivity, both for sensors and for connection to a mobile phone (at the moment, only compatible with the iPhone application). The test version is the one that incorporates the pulse sensor, the Polar H7, which in addition to having Bluetooth 4.0 connectivity also has the possibility of communicating in the 5kHz band, allowing it to send pulse information to the watch underwater. The V800 also offers new features such as advanced training function, Running Index, training and recovery load, different tests to measure your physical condition, etc. We are facing an advanced watch with many options, and many improvements to come.

The Polar V800 has a retail price of £400 for the version without the Polar H7 pulse sensor. If you want to buy it with the Bluetooth Smart transmitter (and 5kHz band for swimming), it will cost you £450. It can be found with two strap colours, the test colour being black and also in deep blue. It can be found in shops from April 2014. 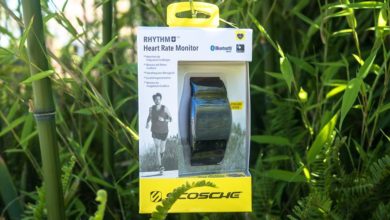 And the winner of the Scosche RHYTHM+ sensor is...