The full analysis of the Garmin 645 has been published. presentation of the model.

Garmin is present at the 2018 CES, and has taken a new model under its arm: the Garmin Forerunner 645. This is the renewal of the 630 range, a model that has been quite forgotten within the Garmin range. So forgotten that it has not even been seen during Black Friday, which means that Garmin is not worried about having an excessive stock either.

Usually the watches of the 6xx range have always meant the arrival of new features with respect to running, but this time the novelty is on the less sporty side. Or less technologically sporty. The possibility of playing music is added, but there are no new functions associated with the new model (there will be power measurement when running, but this is common for much of the range).

One thing it has lost is the touch screen, returning to the classic five-button layout - a little strange when the 600 series has always been accompanied by a touch screen, and after the good results of Vivoactive 3 I wouldn't have been so uncomfortable.

To be clear and concise, here is a list of what is new in the FR645. I want to emphasize that not all of them are new "per se", simply that the model with which I compare is with the 630 and there are things that were not available before. In fact, except for music playback (in the Music model), there is nothing that we have not seen in other Garmin watches.

The specifications are as follows.

So the most important new feature of FR645 is the ability to play music. In December another important new feature came from Garmin, the race power measurement (similar to what is offered by Stryd), but since it requires an external sensor that the clock does not include (HRM-Run, HRM-Tri or race dynamics pod), it is not possible to announce it jointly.


There are other interesting details, such as navigation that will allow you to follow a route previously created in Garmin Connect (or imported through a Connect IQ application such as Strava). We are beginning to see this as a basic function of any mid-range model and not just reserved for the more expensive models.

The addition of Garmin Pay to a Forerunner is also interesting, and it's a feature that will be passed on to the Forerunner range, making it clear what Garmin's intentions are with respect to Garmin Pay. It's clear that they want to promote it and we'll continue to see how the rest of the range will receive it in future launches. They'll need to continue their efforts to be able to reach agreements with more banks and payment service providers.

The FR645 is, in short, a mix between the Garmin Vivoactive 3 and the Garmin Forerunner 935. In fact, the aesthetics are completely similar to the first one, as well as the supported sports profiles. But it is below the FR935 as it does not support triathlon or multisport activities (such as duathlon). It also cannot connect with potentiometers, regardless of whether they are ANT+ or Bluetooth.

As for the colours there are two options for each of the models. The cheaper Forerunner 645, without the possibility of reproducing music, will be offered with a black strap and a beige strap. 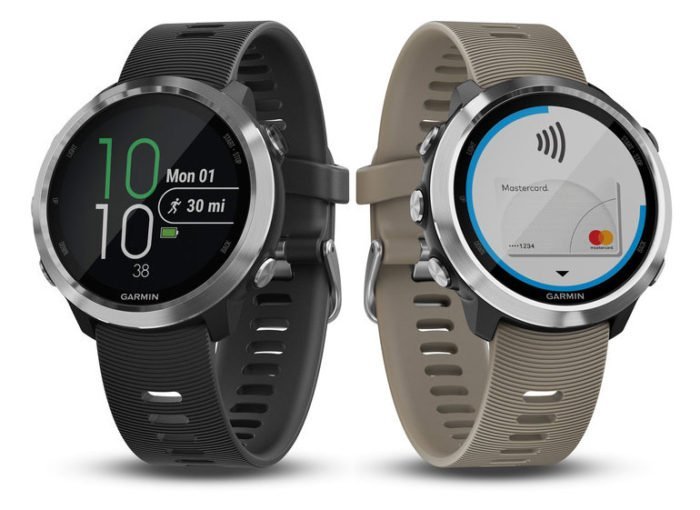 The Forerunner 645 Music will have the same black colour plus a red strap. 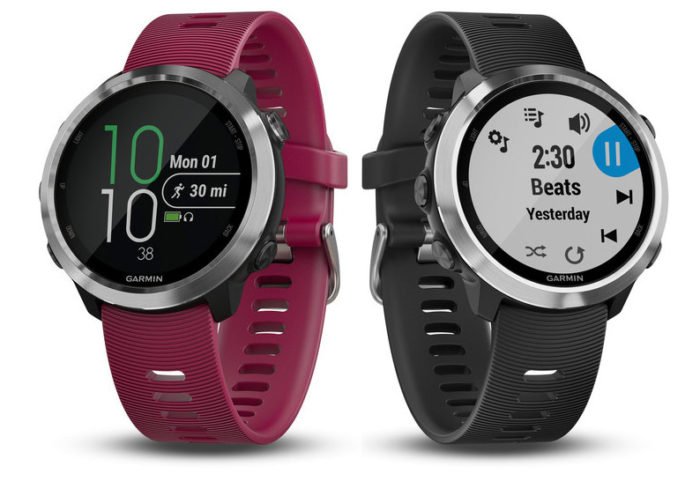 And if you play the difference game, you'll notice that the color of the buttons changes too.

It's already available for purchase, both the normal version and the music version. I've already started with the test, so you'll have it published in the next few weeks, stay tuned!

The new Garmin FR645 will be well received because it completes the huge leap between the Vivoactive 3 and the Forerunner 935. And there is finally a watch in the Garmin lineup that offers the ability to play music independently. It's a model that simply combines things from the Vivoactive 3 and FR935, I think it lacks that "plus" that has always accompanied Garmin's advanced running model.

The list of functions and features do not leave anyone with their mouths open, starting with the 5 hours of autonomy with use of GPS and music that I think is scarce. But we can not expect large numbers when we consider that it is a relatively small watch (the size of a Vivoactive 3) and that the GPS and Bluetooth transmission 3.0 represent a very high consumption.

This launch leaves me wondering if there's room for a future Garmin Forerunner 245. Knowing the Garmin range, I'm sure there is, but... what are they going to take away from it? The competition is tightening and for example the Suunto Spartan Trainer offers a lot for what the replacement for FR235 will presumably cost.

In short... I am left with the feeling that pod could have offered "something more".