A new race, this time 10 kilometers away, after years of not competing at this distanceOr at least, doing it to the fullest. In between, Olympic triathlons have taken place in which the 10 kilometres were also present, but logically the forces with which I reached the third segment are not the same as if you start fresh. I started from an affordable personal brand, having achieved it in precisely one of those Olympic triathlonsSo I was on the starting line with expectations of a good result, despite not having been training specifically for this distance - because I was focused on the Cascais Ironman environment - and not having changed the plan at all in the last weeks.

This time I'm not going to tell you about the race, because a really flat 10 km race doesn't have much to tell you either. You go out, run as fast as you can without losing heart, reach the finish line, swear you won't run this distance again... and start over again aiming for the next one. I'm sure you've been through the same thing.

10 kilometres is a short enough distance to be able to do it practically at full throttle and long enough that if you overdo it it becomes a suffering. In short, it is running on a wire for just under an hour.

So... how am I going to tell you on this occasion? Well, by combining it with part of the test, so I will take advantage of analyzing the activity with all the data obtained with StrydAnd I will do so by making exclusive use of Stryd's Powercenter analysis platform, which is expanding the possibilities it offers.

If you like, we'll start at the end. I managed to complete the race in a time of 41:22, reducing my personal best for the distance by just over 4 minutes. Yes, it's quite a big difference, but as I say there's a lot of time (and head training) between both records. That time served to reach the finish line in 46th position and be 11th in my category. I had a good race, but let's analyze it from the cold data and see what conclusions I can draw with Stryd.

I'll start with an overview of the entire race, with a graph of all the parameters I want to look at: But seen like this you've probably stayed the same as at the beginning, so it's best that we go for parts.

These are the most basic data that anyone has with their watches: rhythm and heart rate, in blue and purple respectively.


To begin with, the heart rate was useless until the 14th minute, when the optical sensor that accompanied me for the occasion began to read correctly (this time it was the Garmin Forerunner 935). I certainly have no idea why it took so long to get in tune, it's the longest time it's ever taken for such a sensor to set the heart rate correctly. Luckily I was more concerned about the power (which we'll see below) than the heart rate, especially at the beginning of the test.

And what conclusions can we draw from this graph? Well, that the heart rate (the one we can use) has remained stable, except in the final sprint which has started to rise slightly. As for the pace, a fast start that I manage to maintain until the turning point (marked by the descent and rise in the graph) and a gradual loss of pace thereafter, despite going downwind.

Without evaluating other data, I think that the reason, apart from fatigue, may be due to lack of hydration. The refreshment posts were placed at kilometers 2 and 8 (on the way back), but around kilometer 6 was quite dry. In fact, after drinking some water, I managed to increase my pace a bit towards the end of the race (the drop in pace that can be seen is the climb to a bridge).

Now we enter Stryd territory, starting with the lap chart you saw earlier underneath the graph.

I want to look at several columns: power, rhythm, form power and leg spring. I will start with the latter, which is closely related to the economy of racing.

To understand this metric, you should think of the leg as a spring on which the body "bounces" when running. The harder that spring is, the less energy we need to push ourselves with each step. If the spring is softer, we must expend more energy to continue moving at the same pace. This stiffness decreases with the onset of fatigue, because with fatigue our running technique worsens.

In the graph you can hardly see any change, but if you look at the average of each lap you can clearly see how the beginning is quite better than the end of the race, and it also decreases gradually.

The first five kilometers are pretty solid, but as soon as I do the turn and I relax for going downwind (in the first leg I was trying not to get off the ground to avoid losing wind coverage from other participants, doing a little drafting), the stiffness of the leg descends confirming that my race economy is now worse. I have disconnected mentally, and with it I have not worried about the technique.

If we go back to the pace graph, we can see how this lower economy of running is equivalent to a gradual drop in pace. In fact, in the last kilometer, with the reserve light already on, the drop in this metric is greater.

Let's now review the power with the two metrics we have available. Firstly the total power and secondly the "form power". The best way to see results is to review both data in a related way. But first I will try to explain what is "form power".

Form power is the power produced simply by the way you run, ignoring everything else. It is the force needed to propel you, but without taking into account the slope or the pace at which you are running. It is preferable to have as low a value as possible, and changes over time in this metric will indicate that you are improving your running technique, as you will need less power to propel yourself and therefore do so more economically.

Less efficient runners will have a higher form power or essential power (come on, I choose that term) compared to athletes with a more refined technique. But it is not a comparable value between different individuals, because it also depends on the weight.

That is over time, but in a matter of minutes it is also an interesting variable to analyze, although only if we review the data in relation to the total power. This relationship can be seen well represented in a percentage, for which I have prepared this table with the data obtained.

Between kilometer 1 and kilometer 9 there is a difference of more than 3%. This means that as the race progresses I lose efficiency, which is to be expected. But maybe that 3% is too big a difference for the distance this race has. If the total power dropped by the same amount as the essential power dropped, there wouldn't be much variation in the pace, because ultimately what would be happening is that we are improving the economy.

With the data in hand, it is the period from kilometer 6 to 8 where I spike (turns 7 to 9), especially on the 8th, where there is clearly a significant drop.

The loss of efficiency, therefore, does not come from a change in this metric, which in fact is quite good at almost all times between 7 and 8 centimeters of vertical oscillation. Above 15 centimeters and below 7 centimeters would be negative values.

Let's move on to the time of contact with the ground, which is defined as the time the foot remains on the asphalt (or the ground on which we are running), from when the foot hits the ground until it takes off again. The typical range is between 150 and 300 milliseconds. This obviously depends on the pace, but a short contact time is equivalent to better use of energy.

In this case you can see how my time on the ground increases as the race goes on. Remember what happened with the stiffness of the leg, which decreased as fatigue and loss of concentration in the technique arrived? Well, here's the result, the foot spends more and more time on the ground, instead of being in the air. And because of the fatigue, there is less and less momentum in the leg. And of course, slower pace. In the end everything is related.

Obviously the key has been in the loss of efficiency from the mid-race onwards. Going back to the start and heart rate there is no indicator of overexertion, I have been at the threshold I can bear for this length of run, slightly above my lactate threshold.

The most notable detail is the loss of efficiency from the middle of the race from kilometre 6 to kilometre 9. The essential power (form power) remains constant while the total power decreases. Therefore the effective power to move is a smaller percentage of the total available. It is the same as the stiffness of the leg and the time of contact with the ground.

I could work on increasing the cadence (I always sin of having a somewhat low cadence, although this is normal given that I have long legs) to decrease the time of contact with the ground, thus improving efficiency throughout the race. The good news is that everything is related to each other, so this work would also mean an improvement in the other metrics such as essential power or leg rigidity.

We must improve efficiency in the final stretch of the race to avoid this loss of performance, whether it is due to lack of energy, hydration or loss of concentration; I must not disconnect mentally and continue to focus on having correct technique.

Still, good race overall and a big bite on my personal record. 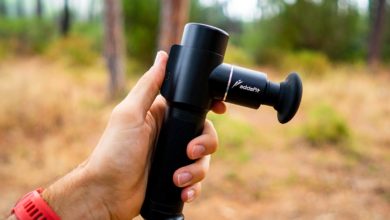