This is an important step because the first model was quite simple (it didn't even have an optical pulse sensor), but this new version is much more complete and offers all the plethora of functions that are present in the Vivosmart 3 from which it derives, including the ability to receive notifications from the phone, stress monitoring, counting repetitions in gym exercises, etc.

I've been trying out Garmin's new activity monitor for a few weeks now and enjoying its classic look on my wrist, but after this test it's time to return it, because it's a borrowed press unit for the occasion, which is a way of telling you that Garmin doesn't offer anything in exchange for a positive review of their product.

Remember that if you want to support the site you can do it by buying through the links you will find in this test (either your new Vivomove HR or toilet paper). It will cost you the same and they will return a small commission which is what covers the expenses. Don't forget that this works exclusively thanks to you and your trust. 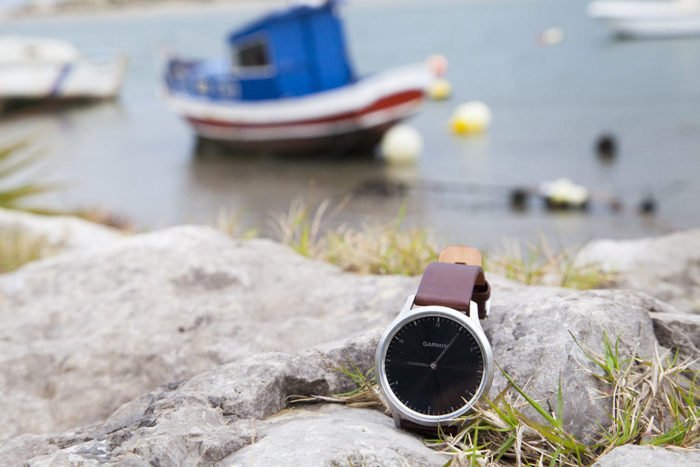 Elegance is not an adjective that can be used often when talking about a Garmin watch; but the Vivomove HR, in addition to being elegant, is the perfect combination of a classic look with completely up-to-date features.


It is a beauty that does not announce at all what it offers inside, nor that it is a watch designed for sports, nor even that it is in some way a smart watch.

But you're not here to read about how good the watch feels on your wrist. We're talking about a smart watch focused on sports use, so it has to do more than just look good.

If there is one thing that is clear, it is that the Garmin Vivomove HR is a unique device. It is true that it is not the first analog clock with an activity monitor. I am not only talking about the original Vivomove, but mainly about the Withings Activité Pop But all these clocks that preceded it were at the same point, a totally analog clock that needed an external device to display the activity information (the phone).

The Garmin Vivomove HR offers a very interesting solution as it allows you to have an OLED screen to display information, but without abandoning the classic watch aesthetics. This OLED screen remains hidden under the watch face, at least while you are not wearing it, because if you press twice on the screen or activate the wristwatch recognition, the screen will turn on to show all the information in addition to placing the hands at 10:10, to remove them from the screen area. 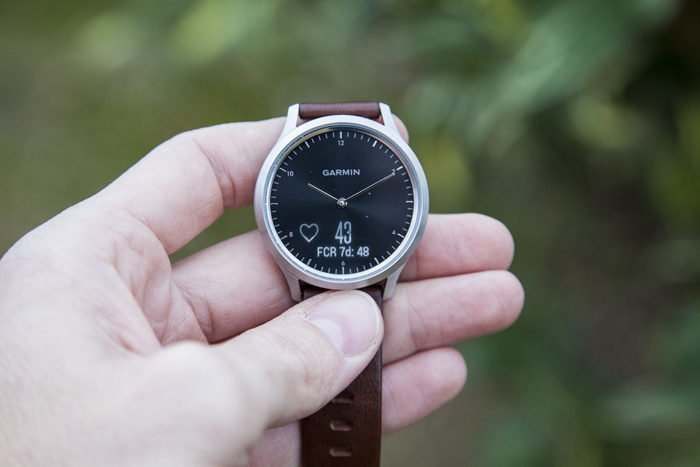 But... there's always a catch. To hide the screen completely and leave an absolutely clean look, Garmin has had to make a concession: it's not easy to use the watch outdoors, at least in full sunshine, because under a strong light source the screen loses all visibility.

Here you can see what the clock looks like with the screen off, with very bright light outside. Unless you look in great detail you won't be able to appreciate where the screen is. The photo below is with the screen on. You can see that it is indeed on, as the clock hands go to 10:10 to leave full space to display the information. The problem is that sunlight prevents reading anything on it. 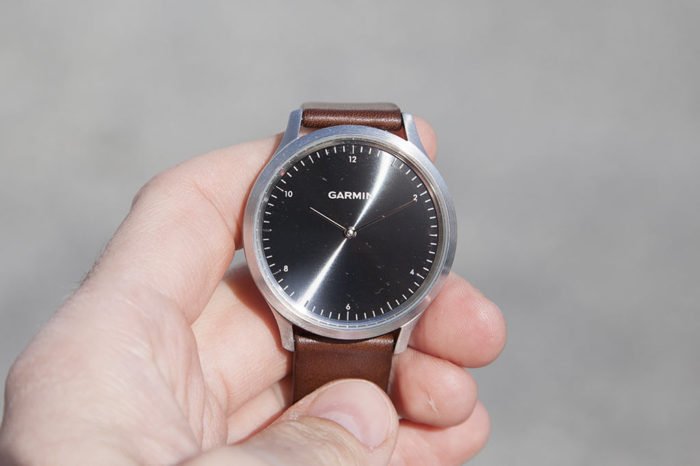 That's my main complaint, that with very intense light it's impossible to see it. But it's true that indoors or in moments when the light is not so intense you can see the content of the screen without any problem. What's more, the resolution is really good.

The watch is certainly a beauty, especially this premium version that Garmin has sent out for testing. Here are the details of each of the two versions, starting with the Garmin Vivomove HR sport:

At the rear we find the optical pulse sensor, the same Garmin Elevate that equips the rest of the range. It is the second version of the same, premiered in the Fenix 5 and that makes the pulse monitoring constant. 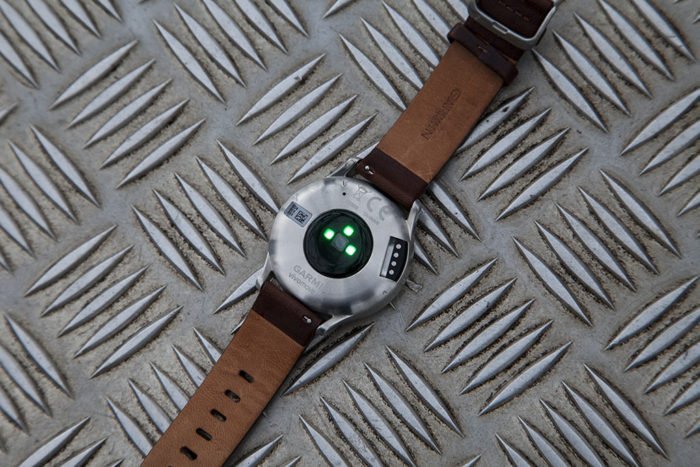 The charger is the same as the one in Forerunner 235 and similar, Garmin has not adopted the new plug with a much easier cable to use, probably because of lack of space in the housing. A pity, because its use is much more comfortable.

When it comes to the battery we have to differentiate between the two modes it offers. As an analog clock it is able to keep giving the time for up to 2 weeks. This is separate from the smart clock part, so you can run out of screen data and activity measurement but still know if it's time to eat until you put it back on.

As a smart clock and activity monitor the battery has a maximum of 5 days of use. There is not much chance that the duration will vary too much from this figure because the clock has no GPS and the display is not very high powered, so even if you get a lot of notifications it should not affect the battery too much. 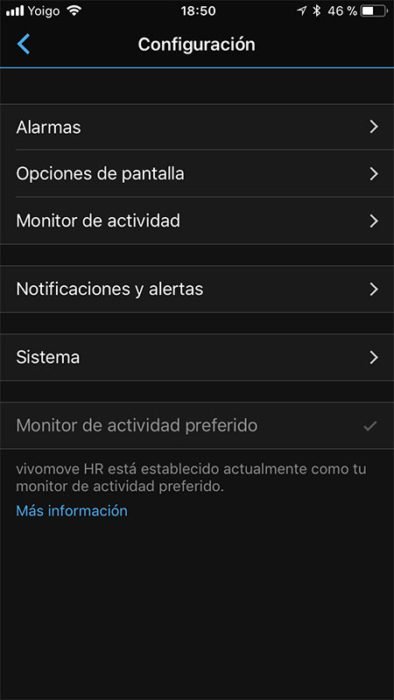 The main screen is displayed through widgets that you can turn on or off. Each widget is a screen that you can see by sliding your finger across the touch surface of the clock. The Quick View widget is what you see when you activate the screen by turning your wrist or double-tapping the screen. 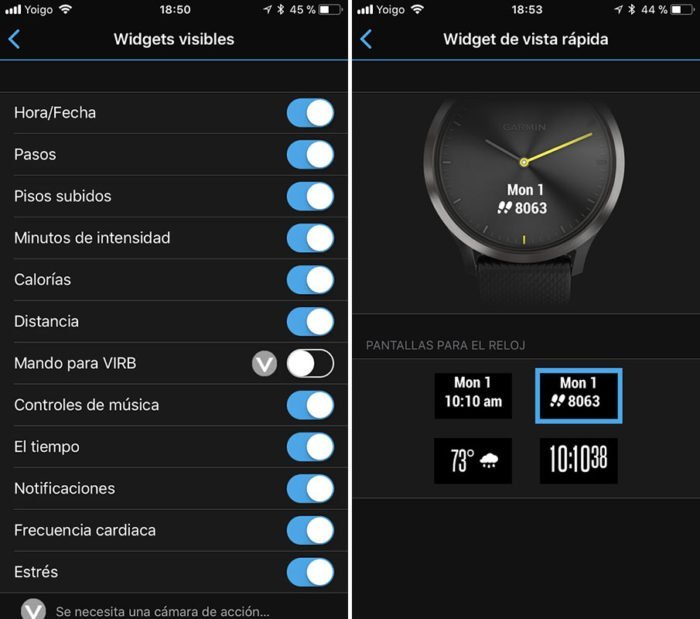 Remember that everything that can do the Vivosmart 3 can do the Vivomove HR, so there are all the new features that were released in it (so if you have any questions more generic, take a look at his proof). 24-hour stress monitoring, relaxation timer, automatic activity log, strength training and even VO2Max estimation, which is usually not available in the more basic range models. 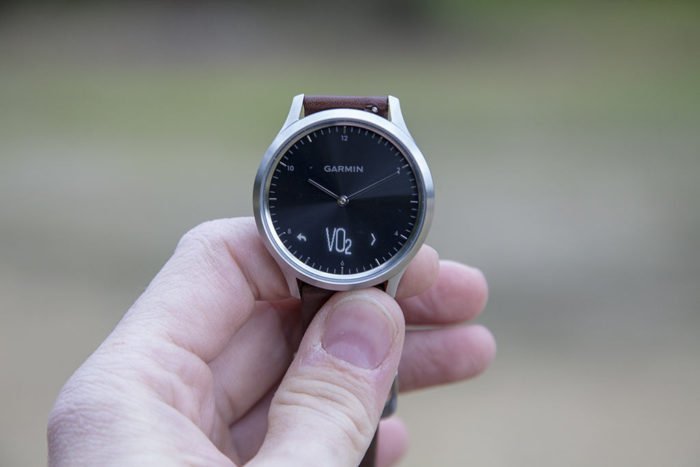 Heart rate monitoring is constant with updates every second, which means you can access complete heart rate graphs for the day. 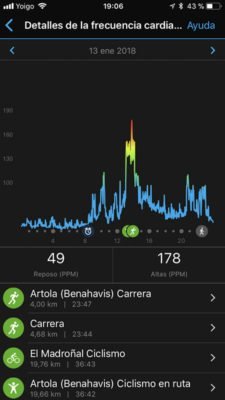 And as I was also saying, the details of stress.

When it comes to sports, there are several profiles available. Except for the gym training profile, there are no major differences between them, just the categorisation that will be made in Garmin Connect after synchronisation. These are the different profiles that you can select:

Each of these activities can be configured in a different way, both at the alert level and the data fields you will see on each of the screens. 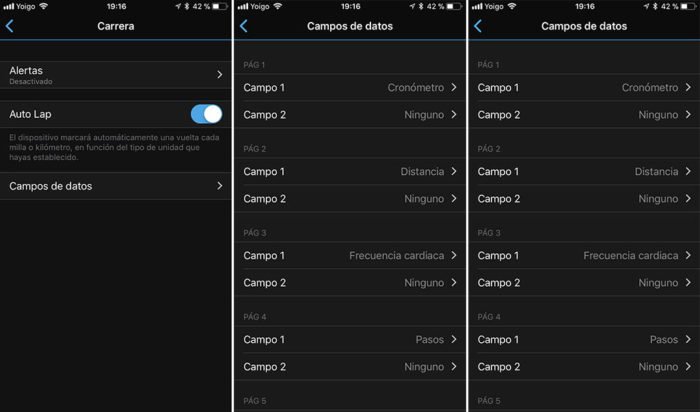 As it does not have GPS (nor can it use that of a connected phone) the activities carried out outside will not have excessive data, nor will the distance or pace have millimetric precision, but it is perfectly sufficient for less demanding users. But the lack of being able to connect with the mobile phone is something that I miss quite a lot and that the competition has been doing for a long time (Fitbit), Garmin should also offer it especially in this model.

Where there is more detail is when training in the gym, as it allows you to automatically identify both the exercise performed and the number of repetitions. It is our job to mark on the clock when we are performing exercises and when the rest, and then you can edit the activity to add weights and correct incorrect information.

It is not 100% infallible, but the ability to identify which exercise we have done is surprising simply by how we have performed the gesture.

There's only one thing like it on the market, and that's the Nokia Steel HRBoth rely on a classic image, although in the case of Garmin its screen is invisible when not in use. It is also larger and allows for notifications. Garmin is superior in every aspect, but that also comes with a small price premium.

Having a traditional watch can mean you don't mind wearing it on a daily basis, even if you're wearing a suit and are in business meetings. Those places where you can be seen with a GPS watch or an activity bracelet are not the best option, but both the Vivomove HR and the Nokia Steel HR will not attract attention. And all this while continuing to record activity and keystrokes for 24 hours, not to mention the ability to receive notifications on your screen.

As an evolution of the original Vivomove it is a major quality leap. In all senses. Its construction is very good and not only provides the optical sensor as a novelty. The integration of the screen and software of the Vivosmart 3 places it as one of the most complete activity monitors.

El Garmin Vivomove HR tiene dos escollos principales. El primero de todos es sin lugar a dudas su precio. No es un monitor de actividad barato, de hecho en su versión «premium» se va a precio similar al Garmin Vivoactive 3But it's still a GPS watch in Sunday clothes. It's clear that if you're interested in the concept of the Vivomove HR, it's because of its classic design. And the truth is that the watch is damn nice and feels great on your wrist.

This point is totally salvageable: you simply take out your credit card and indulge yourself, forget about what it has cost you and enjoy a special watch that is a real beauty.

But the second obstacle is more difficult to overcome: the visibility of the screen under strong light, such as in broad daylight, is nil. It is the price to pay for having a screen that, when turned off, remains totally invisible. Using it indoors, at night or on a cloudy day, you will not have any problem; but seeing the screen at 2 pm on a very sunny day is almost impossible. Even more so if you are practicing sport, which is in theory the reason why you buy this watch.

So the recommendation will mainly depend on where you do your activities. If you are only going to train at the gym it can be a perfect companion for when you leave the office, but keep in mind that if you are going to use it frequently outdoors it can be a somewhat frustrating experience.

I hope that this complete analysis has helped you to decide if it is a valid device for you or not. All the work I do you can consult it without any cost, but if you want to support the web and with it the work I do, the best way to do it is to buy your new device through the links I provide below. And if you don't buy it today, remember to stop by when you are going to do it!

Through these links not only will you get a very competitive price and the best customer service, but I will also receive a small percentage without costing you any additional outlay, which is what allows me to continue offering you proofs like this on the page.