To talk about sports technology obviously lacks all sense at this moment, it is logical that there are other things to worry about. But in the end this moment of psychosis will pass. It'll be time to get back to routine and we'll have to stop replenishing our supply of toilet paper.

This crisis has already become global and will affect launches. We have already seen the cancellation of Sea Otter in Monterey, California. It has been postponed until October, but what will happen to all the releases that the manufacturers planned to do on it?

Update March 30th. Garmin cycling releases are imminent. It is likely that we will see the new products presentation throughout the month of April.

Manufacturers face two options. They can launch it now following the plans that were originally marked, or they can wait until October. Proceeding with the launch right now will depend on how advanced the manufacturing process is.

China is recovering from the crisis and is starting to operate normally and factories are back to business. But the fact that there are factories that are opening doesn't mean that manufacturing is immediate. In a globalized world like we find ourselves there are many components that come from very diverse locations. But it's not just manufacturing. It's software development, logistics, design, administration... EVERYTHING has stopped.

Launching the product now doesn't make any sense because the news were going to be completely blocked by the entire COVID-19 crisis, so the most logical option is to postpone it. How long? Well, it's impossible to tell, because we're not all in the same situation with the virus. Asia is beginning to see the final days of the crisis, while Europe is booming and America is about ten days behind from what we have here...

So, as is happening with absolutely everything else, the launches of the different brands are postponed."sine die". And there are a few things that are going to be delayed.

What were the new releases expected for this year? Obviously the one that has more releases planned is Garmin because, like every year, they have a lot of products to bring to the market. These are probably the ones that Garmin will be launching throughout the year.

Logically, all these models were not "for now". The most imminent would be those related to cycling to be presented at the Sea Otter show. In fact, the most imminent the Edge 1030 has been on sale for a while. And the watches would be destined to be announced throughout the year, leaving probably the top end models for the last quarter (955 and Fenix 6 Sport), just in time for the Holidays.

If there was any doubt that cycling devices are coming down, here's what Garmin has now on offer to reduce product stock. 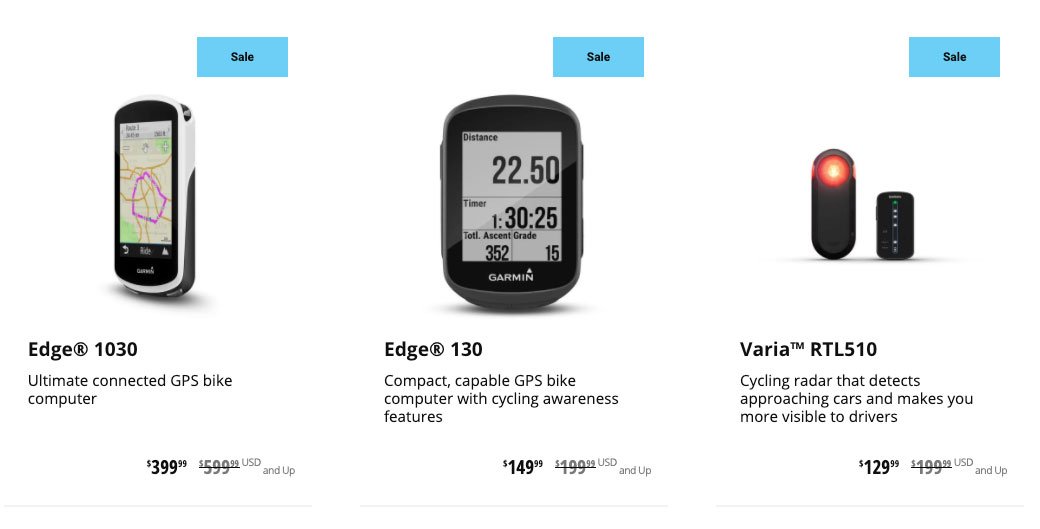 Revealing, isn't it? It is a clear indication of which current models are about to be replaced (Edge 1030, Edge 130 and Varia RTL510).

Here we can see some of the things that are coming from Garmin. These are schemes that the manufacturer has already sent to the FCC for certification.

Here's the Garmin Edge 130 Plus in all it's glory. There is not much to see, beyond that it maintains the same aesthetics and that it remains without a touchscreen. 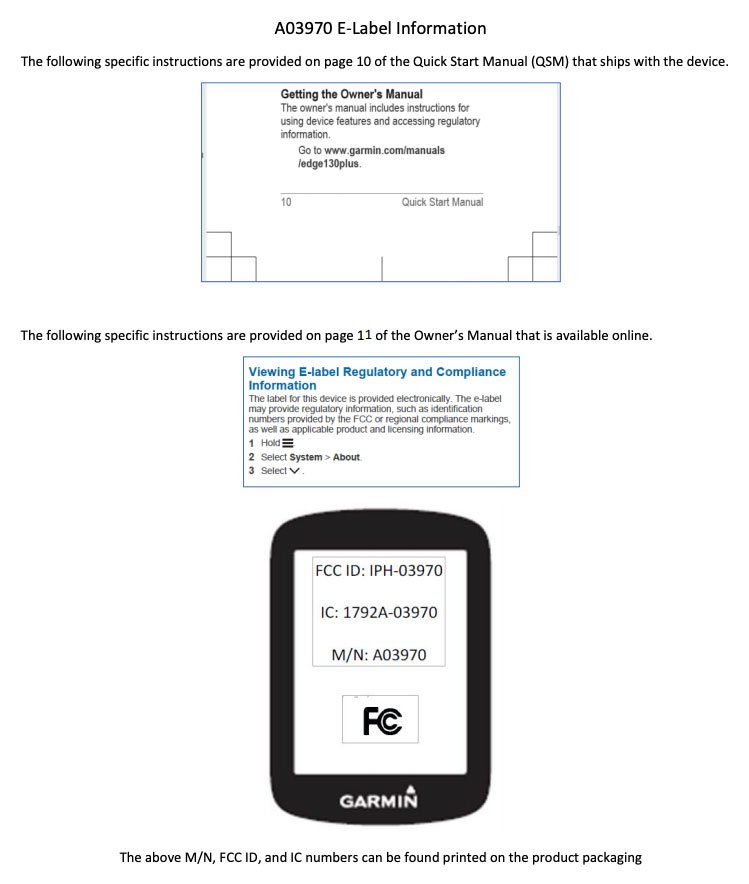 This is the FCC filling when Garmin brought the Edge 130 to market. You can see that it's exactly the same device. 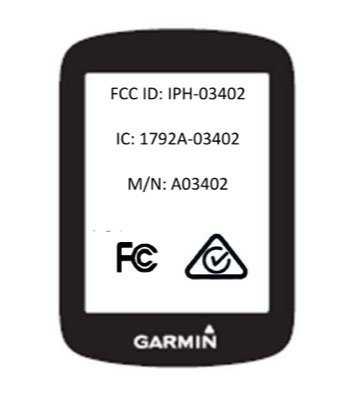 The date to make all the FCC information public was yesterday March 30th, now extended. It is clear that it should have already been officially presented, but that the global situation with regard to COVID-19 has delayed the announcement.

The A03749 will surely be the new Garmin Varia RTL520, and what we see in the image is the back of the device. When it is a device with display, the FCC refers to the location of the label with the information on the digital display as e-label, not to an inscription on the device itself. 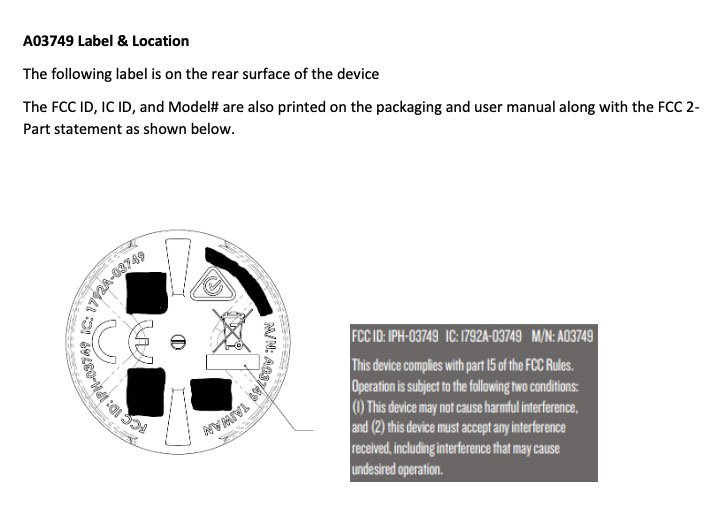 What it's clear is that it's a quarter turn adapter from Garmin.

Then we have the A04024. Again this is a device without screen and which has the certification information molded in the back case. 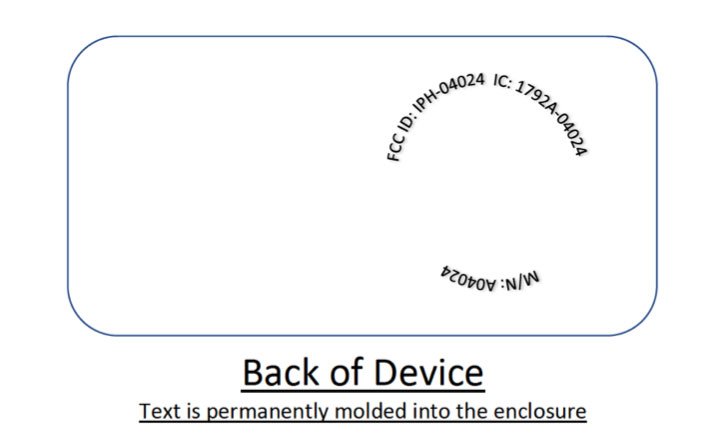 By shape and size it may well be the Garmin HRM Pro sensor.

Then we have devices that have not yet reached the market despite having been published on FCC almost a year ago, like the one you can see below. 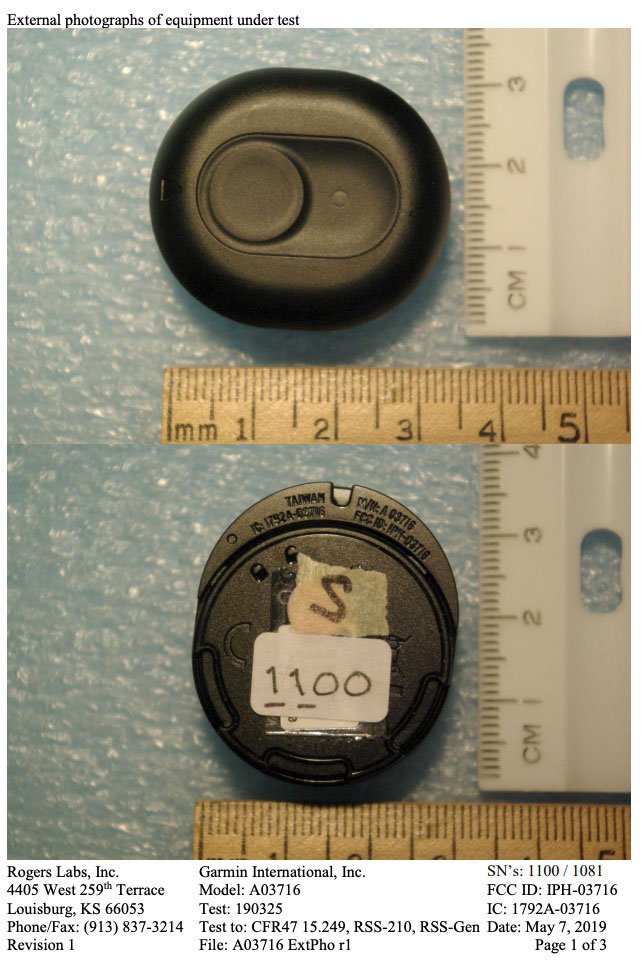 By the shape of the device it's an evolution of the Running Dynamics Pod, but with a button on the front. It probably contains an internal memory to be able to record workouts independently without using external devices.

Below you can see the screen of the new Garmin Varia RTL520 radar, which has been called Varia RDU so far.

The functions are the same as in the current model, but the aesthetics are rounded and somewhat more refined.

But the strange thing is that it's associated with this other device. It's a radar, but unlike the RTL510 it doesn't have any light. And it's wired. 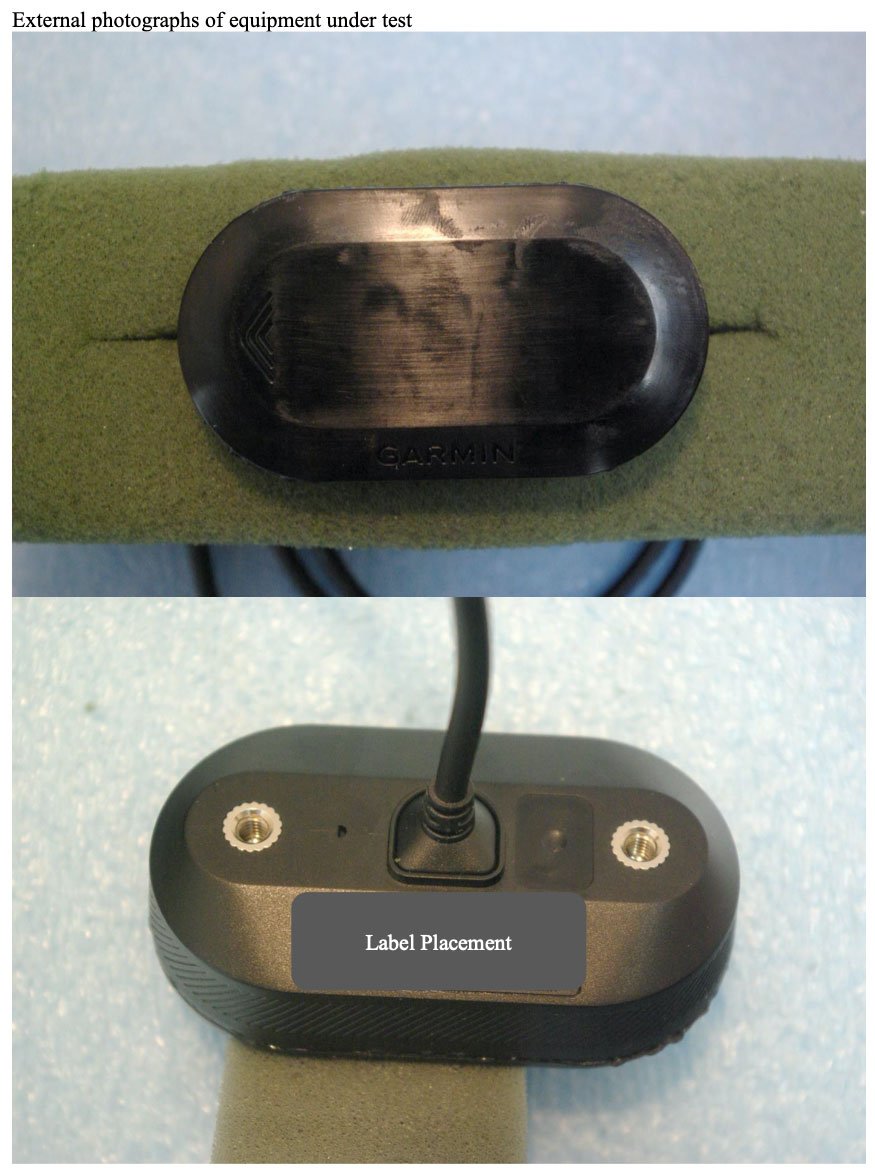 I am not very clear if it's a device focused on another sector other than cycling (for example cars or motorcycles), but it is under the same certification as the Varia RDU screen that we have seen before. It also does not have a quarter turn mount but screws on the back, so it is probably not focused on cycling but on another market.

That's talking about Garmin, but what about the other manufacturers? Polar is also preparing something, a model intended for the outdoors and mountain use that will be called Polar Grit X with HillSplitter (similar to Climb Pro), separating the different ascents we have on a route. This should be associated with an improvement in the navigation function, which is currently quite poor in the Vantage V. To do this, the Grit X will be compatible with Komoot. It will also have a function, called FuelWise, which will provide a guide to how we should perform our nutrition during the activity.

And if Polar wants to continue fighting in the cycling segment, they need to update what they have currently on offer. Neither the Polar M460 nor the V650 are up to what the market requires in 2020, and are in dire need of renovation.

I don't think Suunto will release anything new for 2020. They have just released the Suunto 7 and with that, the Suunto App and Suunto Plus they have more than enough to keep busy throughout the year

The first model in its range that will see a renovation is the Suunto 9, although I think the moment of its renovation is still far away because it was released just a year ago. At this time different special and limited editions have been released, something common that serves to keep the model alive in the memory of customers.

The COVID-19 pandemia will not only affect developments, but there will also be a shortage of products in many segments. In fact we are already seeing it in some models such as the Suunto 7, in which some of the colors are absolutely out of stock. 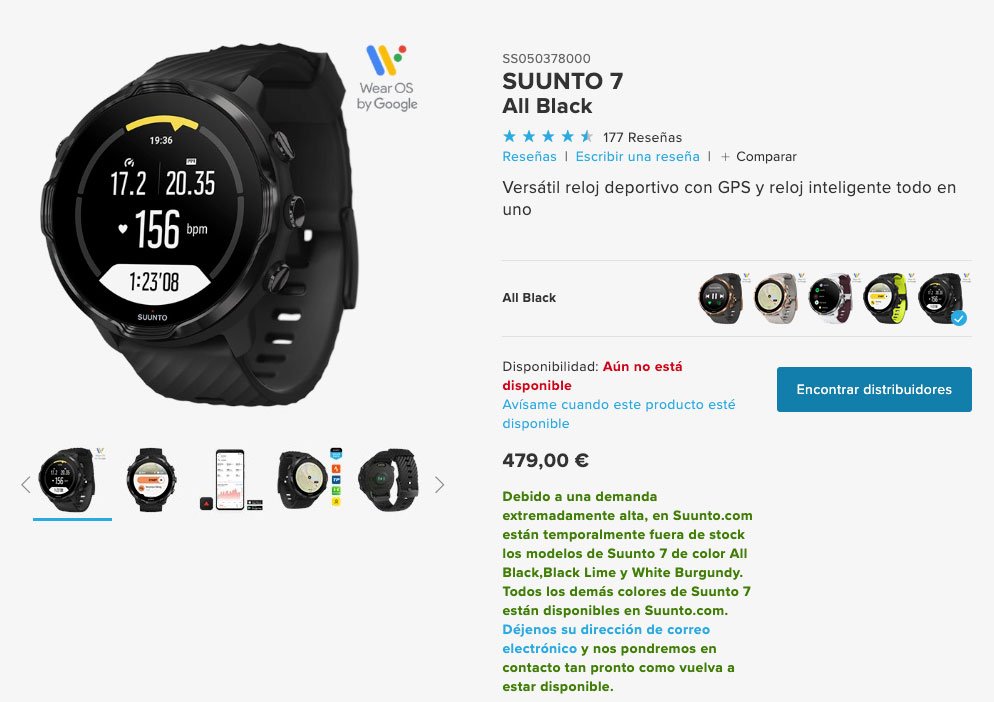 It's also a model that we can't find on Amazon, probably because that lack of stock. The reality is that right now it's only available on El Corte Inglés.

But it's something we've been seeing these days, for example with the bike trainers. In a matter of days almost all of them are sold out, especially the cheaper options.

The situation of watches, wearables and bike computers is different though, because it's easier to keep the product stock (it occupies less in the warehouses) and are also subject to greater rotation (the service life of a bike trainer is much longer, so its number of sales is smaller), so there is more quantity manufactured and stored.

The situation of Suunto 7 is different from that of others. It was launched in the midst of the crisis in China (January 31) and has impacted it like no other model in the market.

Clearly, the forecast for 2020 will be adjusted. Still. IDC estimates that the wearables segment (where we find GPS watches) will continue to grow throughout the year, albeit to a lesser extent.

The increase will be 9.4%. It may seem like a good figure, but compared to the 89% increase in 2019, it is clear that COVID-19 will have a very significant impact on the sector.

Recovery will come in the second half of the year, when we will see a normalization of the situation worldwide, and probably because it will when the release of new products will be shifted to. Fitbit Charge 2 and Fitbit Flex 2. Starting back to school. Launch of the new CHOICE FINDER for watches and cyclocomputers