We knew these models were around the corner. In fact, there have already been leaks on social networks over the past few weeks, and today Garmin has finally made it official.

They were the only models left to be renewed in the catalogue offered by the Americans, especially in terms of offering Connect IQ in all of them. Now, except for the most basic models (Forerunner 25 and Edge 20/25), the application platform is present in the rest of the campus.

Before going into detail on each of them I will make a brief summary of where they are in the range.

Garmin Forerunner 230 - Natural substitute for the previous one Forerunner 220It is located in the mid-range, a category that reigned comfortably until the arrival of the Polar M400.

Garmin Forerunner 235 - Replaces the "old" one Forerunner 225 (note the irony) As with the 220/225, the difference from the 230 is an integrated optical pulse sensor (with surprise).

Garmin Forerunner 630 - Arrived to replace the Forerunner 620The top-of-the-line model of the corridor-oriented watches.

Once you're clear on which range each one is in, we'll see what new features they bring. There are some common ones, such as the adoption of modern technologies that we could expect in their renewal (activity monitor, mobile notifications, Connect IQ support, larger and better screen). But there are some new features in all models, both features that were previously only present in the high-end and now move to the mid-range, and new functions.

The full review is now complete, so if you're interested in all the details of the Garmin Forerunner 230, I recommend reading the full review by clicking here. 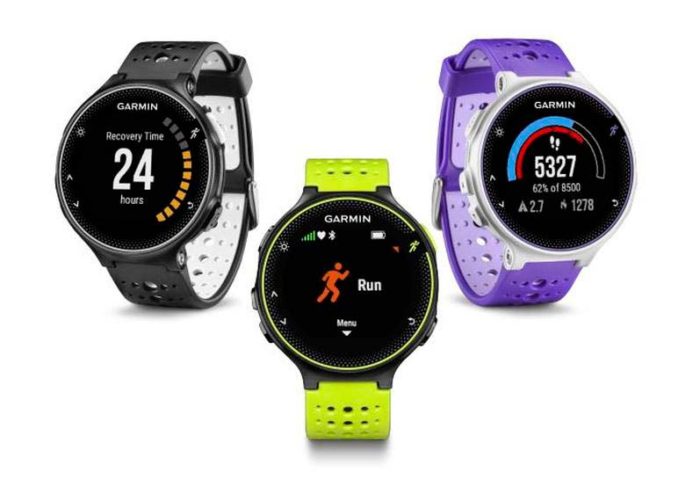 
These features are purely software, algorithms from the company FirstBeat that Garmin reserved for its top range and that now we see going down a couple of steps. And of course the addition of the specific mode for cycling, something that we were asking for (if only for comfort) and that will also come with support for speed/cadence sensor.

The following are the specific new items in this range

The screen is now much larger (almost 50%) but without increasing the size or thickness of the clock. Both measurements and weight remain virtually unchanged, but what has been reduced is the frame of the screen, giving way to a display that takes on greater importance in the front of the clock, with considerably more contrast than the one offered by the Forerunner 220.

With this renovation, the Forerunner 23rd is located in the same place where the Forerunner 620The new catalogue is a new version of the original one, adding specific features of the high range along with other basic features that were obvious to come in the catalogue.

The full review is now complete, so if you're interested in all the details of the Garmin Forerunner 235, I recommend reading the full review by clicking here.

The Garmin Forerunner 235 offers essentially the same functionality as the Forerunner 230, but with an optical pulse sensor on the wrist. Forerunner 225Garmin has decided to create its own technology. 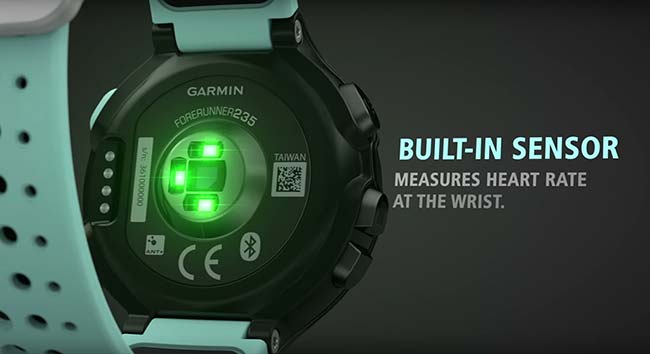 I find this move quite logical. My opinion regarding the Forerunner 225 It has always been a clock that has served as a market analysis, to check what the acceptance of such a clock would be among the general public. In this way they have been able to assess whether their potential customers are willing to pay a premium for having this technology, but without taking risks from the beginning. So they created a clock in which they hardly had to invest in R&D and launched it on the market.

What is surprising is the speed with which the FR235 is being launched on the market. Those of you who bought the FR225 a short time ago will probably not be very happy right now, seeing the new announcement. But if it has been so fast it is a clear sign that the technology is in demand and that this is what we will continue to see in the short/medium term in all watches.

We already knew that the Mio sensor would not be a problem, as it had been tested on both our own and other products, but in the case of Garmin (just like Polar's with the A360), I will think of the sensor as "unreliable" until I can prove otherwise. That is, I dare not validate the accuracy of the sensor until I thoroughly test it in the next few months, no matter how much Polar or Garmin are behind its development.

For the time being, these sensors will remain in the mid-range, since to see them in high-end watches they still have to solve the reading of the pulse variability, something that all high-end watches use for their specific function algorithms. But work is already underway and important steps are being taken to achieve this.

In fact, in Forerunner 235 it is necessary to connect a pulse sensor by ANT+ if we want to have estimated VO2Max data, precisely because the sensor cannot make the reading of the pulse variability.

The optical sensor isn't the only new feature. Forerunner 235 will also allow you to relay the pulse data from the optical sensor via ANT+, meaning you can use Forerunner 235 on your wrist and have it transmit your pulse to other devices, such as a Garmin Edge on the handlebars of your bike (or send it to a phone or other ANT+ compatible device).

And just like Fitbit with the Charge HR and arises. (and unlike Polar), the watch will constantly use the optical sensor to track the pulse and then synchronize the data with Garmin Connect.

The full review is now complete, so if you're interested in all the details of the Garmin Forerunner 630, I recommend reading the full review by clicking here. 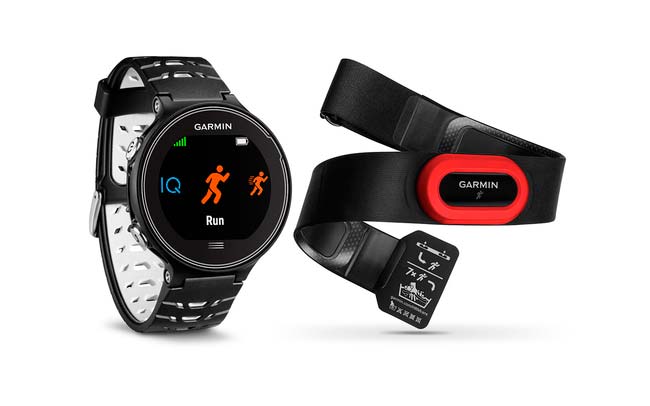 The following are the most important new features for the platform, some of them seen for the first time in this FR630

As with the Forerunner 230 and 235, the display is now significantly larger, and in the case of the 630 it is still touch-sensitive. The range increases to 16 hours of continuous GPS use. Of course it is supported by Connect IQ applications, smart notifications and activity monitoring. Also the metronome function, which was introduced in the Forerunner 920xt and that we've been seeing it incorporated into the other later models.

But here are the main new features. Firstly, Running Dynamics now offers more functionality. It does not need a new pulse sensor, as it is still the same HRM-Run that was released with FR620. But now new metrics are added: 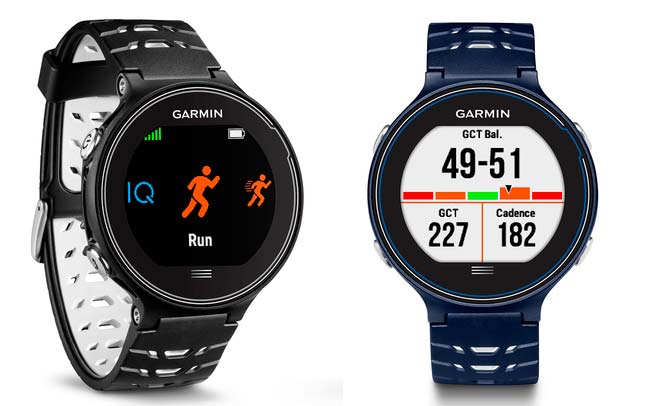 The next novelty is the lactate threshold test. I am very curious to try it, because I am not very clear how they can determine this value simply by heart rate values, especially since until the advent of BSX Insight, the only way to check it reliably was with a puncture and blood tests from time to time.

For those of you who do not know what the lactate threshold is, it is the turning point between the rhythm that we can maintain for a long time and the rhythm that if we maintain we will not be able to endure. When we run, we produce lactic acid, which stays in the muscles and it is our own body that takes care of cleaning it. The lactate threshold is the point at which our body is not able to eliminate that acid from the muscle fibers, leading us to fatigue.

So the question is how Garmin can determine this value simply through an algorithm, and what value it will give us. My guess will be that it will indicate heart rate values from which our fatigue will increase. Another thing to look out for in order to do the full analysis.

Well, that's all very nice, but when will they be available? Well, there's no specific date, but Garmin says they will be available in the fourth quarter of 2015, which is from the minute you read these lines until December 31 at 11:59 p.m. But based on the experience of previous launches, I would expect them in January or February of next year, especially with the chaos that occurs when a new product comes to market.

There will be a wide variety of colours to choose from, as detailed below: 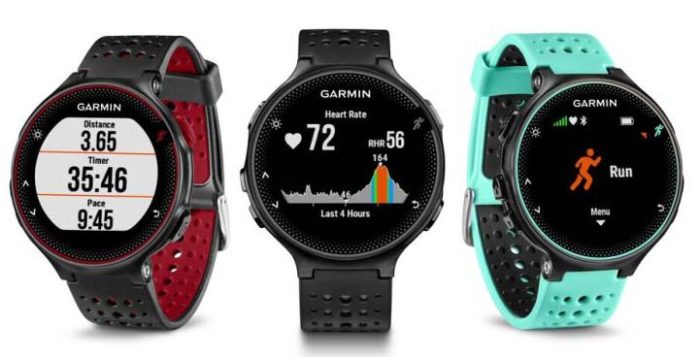 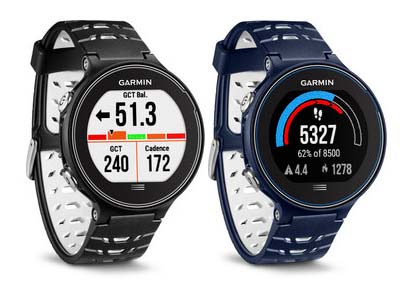 And as for prices, which is the most important, they will be the following:

The renewal of the range was quite expected, as both the 220 and the 620 had been on the market for quite some time. But it was no less surprising. I think Garmin has taken a big step, especially in the case of the Forerunner 230, as it has put it back at the top of the mid-range. Polar had eaten their toast with the M400, something you have probably already seen in the sales level. The M400 offered a higher level of features at a lower price, especially at the level of support for other sports (mainly cycling), which Garmin has finally solved by giving the watch a new specific mode. It also receives all the features that were previously reserved for the top range.

The Forerunner 235 brings the most important new feature, with its optical pulse sensor. It's a major leap forward for Garmin, and it's crucial that they get it right. They've already taken their first step with the Forerunner 225And having determined the real interest in this type of sensor (and assessed how much more the public is willing to pay for it), they have set about creating their own technology - something that will not only save them costs, but also give them complete control over what the sensor can and cannot do.

Finally, the 630 brings important new features, not only for its category but globally to the entire Garmin range. Forerunner 620 Garmin continues to launch new features in its high-end model, with important announcements such as the lactate threshold test and new metrics for running dynamics.

Thank you very much for reading, and remember, if you have any questions, you can use the comments below. 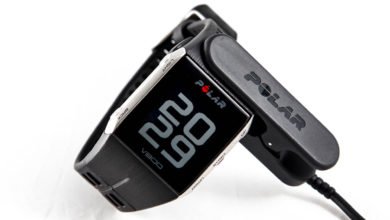 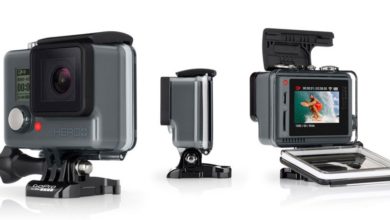