Finally, the new range is presented today Garmin Fenix 7 after many months of speculation, leaks and speculation about what Garmin had in store for its new flagship. The Fenix range has become for years the one that practically eclipses the rest of the models and practically the one that dictates the future of the segment.

As we are used to, the Fenix 7 is no longer a single model within the Garmin watches but has become a range in itself (as can be the Forerunner, Venu or Vivo). Garmin continues to offer different watch sizes and different "finishes", with more or less additional features.

This is not the only presentation taking place today. Also unveiled is the new Garmin Epix (which would be Epix 2), but that has a specific article to talk about it, in this one I will focus exclusively on the Fenix 7, so I will get right into it.

Within the Fenix 7 range there continue to be different versions of the same watch, but there are no longer normal and Pro versions but the difference will be in the solar charging. So there is no longer a cheaper version without maps or music playback, I guess to cover that market segment Garmin will keep the normal Garmin Fenix 6 in its catalog of models.

But there is still a specific Solar version which, like the previous models, provides solar charging. For this 2022 version, the contribution is greater, as the ring that allows the watch to be charged with solar energy is now significantly larger.

So Garmin continues to have a fairly wide Fenix 7 range with different "finishes" and sizes:

In terms of size, we still have three sizes, in denominations that have become classic and commonplace for everyone.

For the Garmin Fenix 7X there is no non Solar version, the base is including solar charging and from there you can add the sapphire crystal and titanium finish.

In a way, the Garmin Fenix 7 is the new model in the Garmin range renewal. The Fenix 6 came to the market after the Fenix 7. Garmin Forerunner 945 so it used its new products as a basis. This time it is the Fenix 7 that is the first of all these renovations.

Below you will find all the new features that 1TP10 can find in the new Fenix 7:

As usual with Garmin, there are no huge changes with respect to the previous model, but there are small innovations here and there that, as a whole, end up making up an interesting overall package.

Let's get down to the most important details.

The Garmin Fenix 7 is not the first model of the manufacturer with touch screen, already used this technology in the past with watches of the Vivo range or all Venu. But this is the first time that Garmin includes it in a watch focused primarily on sports performance.

Despite the touchscreen all Fenix 7s continue to have the same 5 control buttons as before (compared to the 2 or 3 buttons of the models above). That means that the control of the pod watch will be exactly the same as before, but the touch control may be interesting in more than one situation.

The clearest example is going to be in the use of maps during navigation. Certainly, scrolling on a map and viewing different options of the roads using the buttons exclusively is anything but comfortable. Through the buttons we have to switch between scrolling vertically, horizontally or zooming.

Thanks to the touch control it is now possible to move around the maps directly by sliding your finger across the screen. However, keep in mind that it is not going to be like moving through Google Maps on a last generation phone. The Garmin Fenix have always been watches that have stood out for their good autonomy figures. And after the arrival on the market of the Garmin Enduro last year it was to be expected that Garmin would use some of the solutions it used in that model. And indeed, the autonomy data announced by Garmin are really good. I have prepared this small table with all the data: 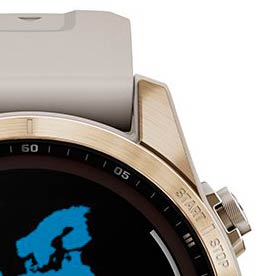 This is the "basic" autonomy, but another important new feature of the new Fenix 7 Solar is that they have a larger solar charging surface.

This results in a greater use of solar energy which, together with the greater autonomy of the watch (i.e., since the watch is on longer, it can take advantage of the sun's energy for a longer period of time), means that we are now talking about significant contributions to autonomy.

In this table I indicate the contribution of the solar load to the autonomy of the previous table.

And again, just to put it in perspective with respect to Fenix 6, here are some examples:

These are just two examples but as you can see these are now significant figures, something that really makes opting for the Solar version of the Fenix 7 make sense.

LED illumination in the Fenix 7X Since the advent of the Fenix 5 and the multiplication of models, the X version has always included a unique novelty not only with respect to the other Fenixs but to Garmin in general. Whether it's maps, oxygen saturation estimation, solar charging or other functions, Garmin has always had an ace up its sleeve for the larger model.

Integrated lighting is what Garmin has reserved for the Fenix 7X. It has an integrated multiLED flashlight that can help you when it's not too bright. And that same light also serves to give you safety when you're running at night.

I don't think I'm the only one who runs at night, and who has run on a road on occasion. It's more important to be seen than to be seen. That's where I find this LED flashlight most interesting.

The LED flashlight has several modes of use. The first and most elementary as a flashlight, simply turning on the light to poder see what's in the dark. Think of it the same way you use your cell phone flashlight.

But there are other sport-specific modes of use. For example through flashing or pulsing, to allow you to be seen. Next to this there is another mode for running which is combined with cadence when running.

Finally there is an SOS function that will flash with the international MORSE code of... exactly, SOS. In the software section, the Fenix has a new function called "Stamina". This is an algorithm very similar to the one offered by Xert through Connect IQ with "Time to Exhaustion".

Based on the data the watch has from previous training sessions and the level of effort you are applying in the session, it will indicate a percentage of available energy remaining so that you can calculate whether with the remaining route ahead you will be able to endure at the current level of effort.

This is a display that you can add to running or cycling profiles and the main purpose is to try to tell you if you will be able to complete the training or race you are doing at the pace you are running.

There are two additional data fields that can be added: time and distance to empty. If you are running a half marathon and at the current pace the watch says you have energy for 10km and you are still at mile 3, maybe you have started too hard.

No LTE... at least for the moment.

One of the things that strikes me the most is the absence of LTE connectivity. Within my speculations I expected it to be present in some way in the Fenix 7, but for the moment none of the announced models incorporates it.

Just because it is not offered at launch does not mean that it will not be present in the future. Just as with the Fenix 6 mid-life versions appeared (the Fenix 6 Solar) my expectation is that these versions with LTE will eventually appear.

The LTE feature is a differentiator with respect to its rivals. No other brand has the capability to develop a similar feature, and it makes no sense for Garmin to have gone through all the development and what it entails in terms of contracts with different operators to offer it exclusively on a niche model (the 945 LTE).

Moreover, if safety and tracking functions make sense in a watch, it is precisely in the Fenix range. They are watches focused to be used by users who are going to spend a lot of time outdoors, doing mountain routes and with specific needs for both tracking and security.

Why hasn't it arrived yet? Possibly because of the epidemic and the lack of chips in the global market. It is something that has affected all manufacturers and obviously Garmin was not going to be less.

This is why, when the situation with respect to microconductors tends to normalize, I expect some version with LTE to reach the market.

They are now available for purchase.

As for prices I did not fail much in the predictions I made a few months ago, and start from 699€ for the most economical models (Fenix 7 and Fenix 7S without Solar charging).

These are the price ranges according to the different versions of each model.

The RRP price is increased by 50€ for the Garmin Fenix 7 and 7S with respect to the equivalent Fenix 6 (the Pro model). The Fenix 7X Solar has the same price as the Fenix 6X Solar, with the "problem" of not having a cheaper version available without solar charging.

All in all, knowing Garmin the prices I expected to find.

At last the mystery has been unraveled and we now have the full details of the entire Garmin Fenix 7 range. Remember that these models are also joined by the new second-generation Garmin Epix, which is basically the same as the Fenix 7 but with the AMOLED display.

To summarize, the most notable changes found in the Fenix 7 are in the autonomy, the incidence of solar charging (now it is worth what it brings) and the touch screen. The rest of the features are very similar, except for some software changes.

However I do miss some things. The already mentioned absence of LTE connectivity is strange considering the enormous effort that Garmin has had to make to make it a reality, and especially considering that if there is an ideal watch to have this feature is the Fenix range, both by type of use and autonomy (at least in the Fenix 7X Solar). But I understand that the situation regarding the semiconductor crisis has podido have something to do.

In any case I urge you to stay tuned for the full real test to come in the next few weeks as soon as I have a unit to poder work with.

Until then... Thanks for reading!