Garmin today unveiled new additions to two of its outdoor watch families. Both to the Garmin Fenix 6 range as well as to the Garmin Instinct new models are incorporated, including the solar charge among its list of features.

That is, that function that had been reserved for the top of the Fenix range (the Fenix 6X Pro and its 51mm diameter), is already present in the rest of the Fenix 6 series and you can buy any of its sizes with the solar charge glass. And, by the way, also in the Garmin Instinct.

Of course, you have to pay a price... but if you want solar charging you no longer need to opt for the most expensive option. In short, these are the new models that Garmin has presented today (eight!):

In some cases Garmin has used the opportunity add some new functions to the software. But before we go into details, let's go with the features.

As with the Fenix 6X, the Fenix 6S Solar and Fenix 6 Solar are just a different version of the model, let's say, original. In all three cases they simply add the technology needed to carry out solar charges and thus slightly increase the total watch's battery life.

However, Garmin has taken the opportunity to make "official" (so to speak) some of the features that it has been adding lately through updates in recent months and that had already arrived in both the beta and the official version. As expected, all this features joins the extensive list already offered by the Garmin Fenix 6 (which you can see in detail in the full review of the Fenix 6 series):

But don't forget it, between a Fenix 6 and a Fenix 6 Solar the only differences are the solar charge and the slight aesthetic changes between them. But at a software level, both offer the same features.

As for the Garmin Instinct Solar, the new features are also seen in the extended autonomy provided by the Power Glass. In the case of Instinct it is more remarkable because, having a monochrome display the battery consumption is lower. The use of the new Sony GNSS chipset adds to it too.

And it has been a great opportunity to add the new OHR sensor as well, including the Pulse Ox function (to estimate blood oxygen saturation). 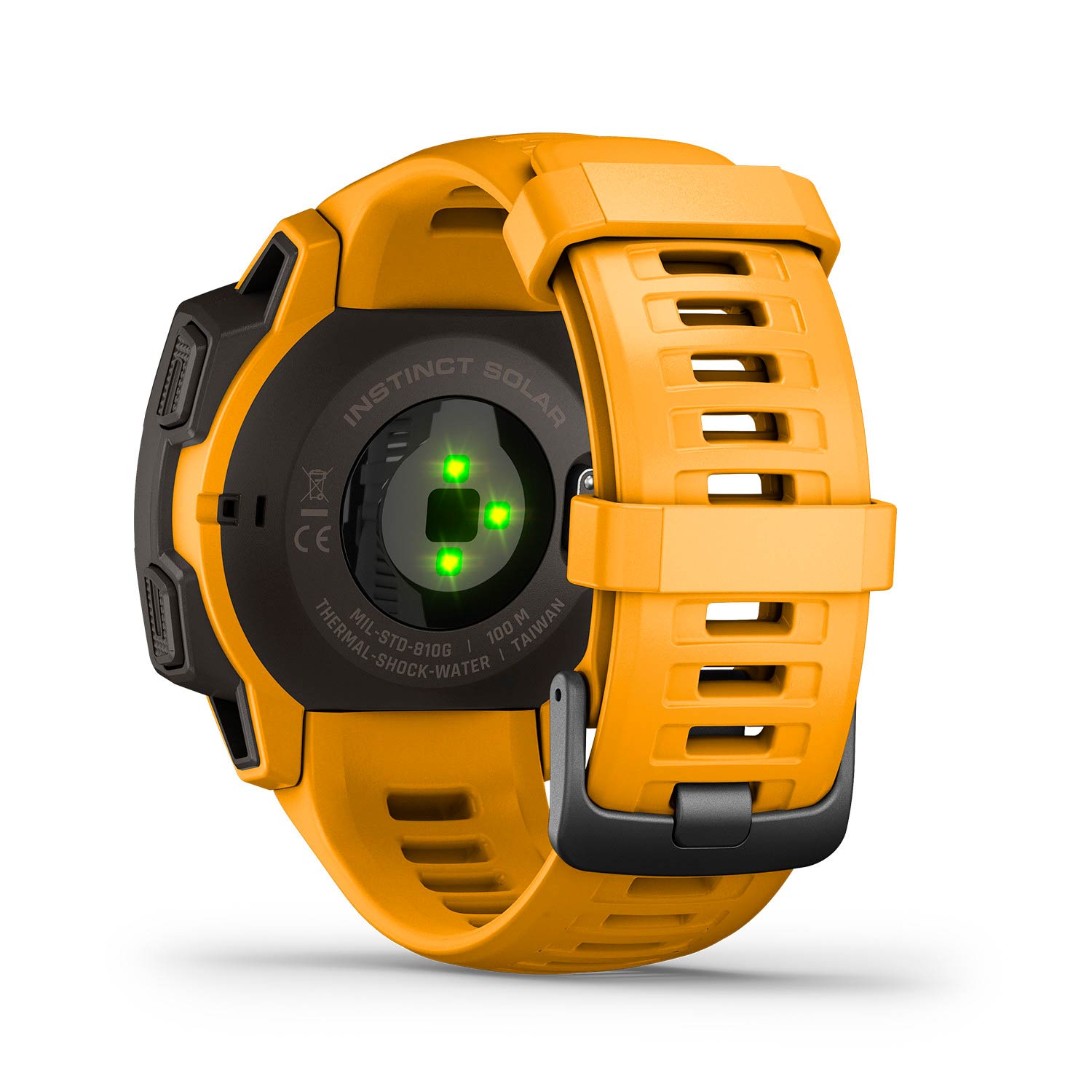 Unlike the Fenix 6 there's no surf sport profile for all the models, although there will be a Garmin Instinct Solar Surf Edition with the same possibilities as the Fenix 6 (wave tracking and Surfline Sessions). It is one of the new special editions that accompany the Instinct Solar, as we will also see one with camouflage decoration and of course the Tactical.

Despite the fact that the new Instinct does not bring with it any major software updates, it does receive a few functions that are present in the Fenix 6, all of this to get a watch totally focused on outdoors use and with an astonishing battery life.

Of course, it continues to offer MIL-STD-810G military-grade resistance certification and its very special aesthetic (very similar to the Casio G-Shock).

But where it stands out above all others is in its battery life. It is already much superior to the previous model even without considering the solar charge (Sony chipset and the new sensor has something to do with it), but thanks to the solar charge and the low consumption of the monochrome screen we can see real differences here.

While in the Fenix 6 Pro Solar we are talking about slight increases in battery life, the Instinct is a complete different animal. Talking about 30 extra days in use as a smart watch thanks to solar charging is a remarkable fact. Or the 8 extra hours of GPS usage you can get.

In short, in the case of the Fenix the extension of battery life is mere testimonial, but in the Instinct Solar it is something to consider.

These are the two details that were, perhaps, the least known until now. The surf profile was quietly introduced to the Fenix 6, but so far the support for the Surfline app and the ability to have videos of the waves you catch while surfing was not yet announced.

Starting with the first, the new surf profile allows you to count how many waves you have taken in total during the session. It will also indicate the distance surfed by wave and the total, along with the speed. 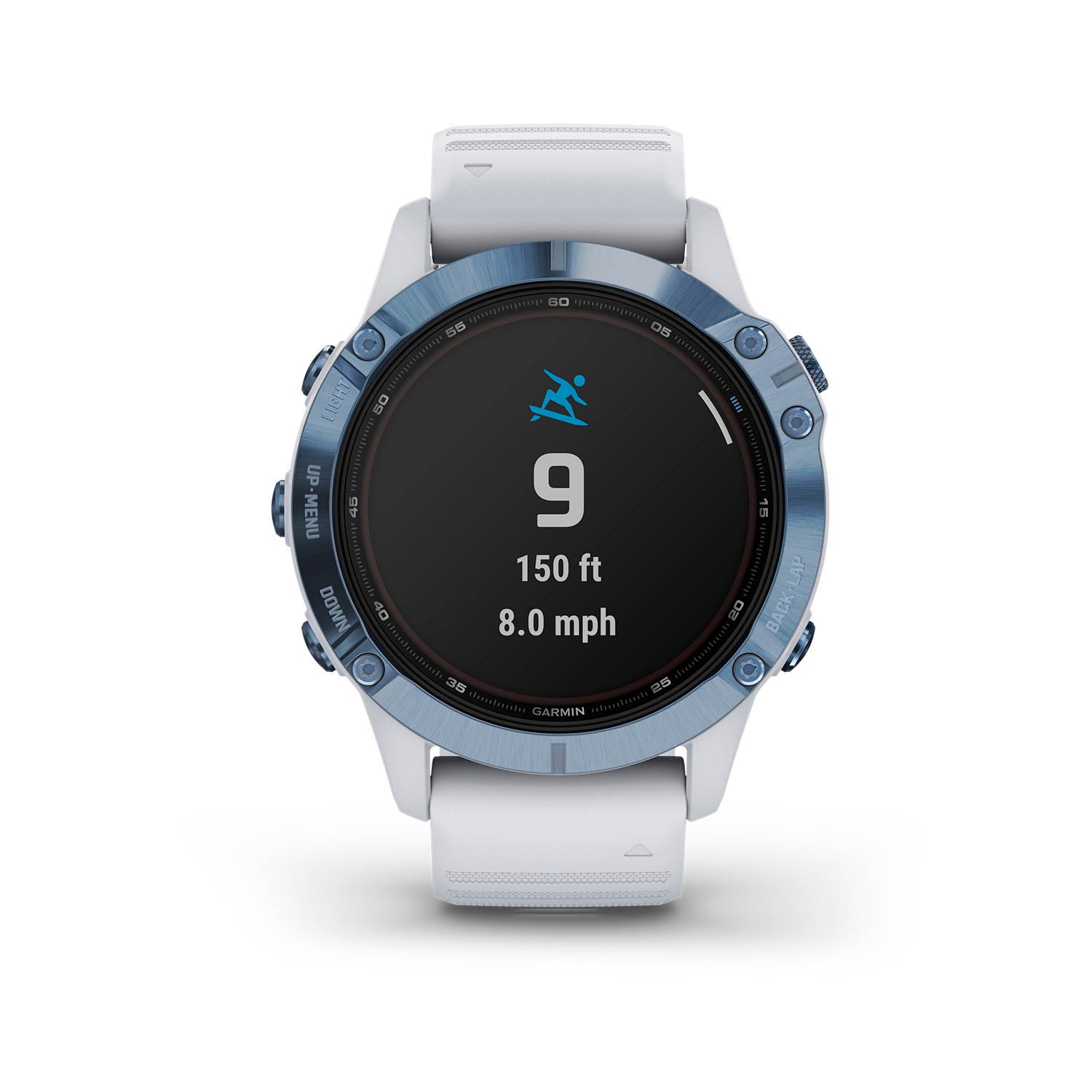 What about the Surfline Sessions? It's about integration with the Surfline app. This company has numerous cameras on different beaches around the world that record at all times.

By activating the Surfline Sessions mode, the watch will start recording GPS locations along with the waves you've surfed, leaving all that information stored. Once your session is over, you can download it from the watch and sync it with the app and then sent to Surfline.

From that moment the application will take the GPS data and time to extract that video fragment and offer you all the videos of the waves you have surfed. But this will depend on you finding yourself on a beach with Surfline cameras, and that's harder to find...

You can see more info about Surfline Sessions on their website.

All these models will be available in the coming weeks, but as I said at the beginning the solar charge comes with a price. All these new models are more expensive than their counterparts without solar charge. Something that is normal and expected (the new technology has to be paid), but is amplified by the price drops already suffered by the Fenix 6 and Instinct, so the price difference at launch is much greater.

And what's the price? I'll give you the details below.

If we compare it with the versions that do not have solar charge, this feature means 150€ on the Fenix 6S and Fenix 6 (you can even talk about 200€, because their prices are now reduced) and 100€ on the Instinct. But the real difference is greater, because we already know that the original models can now be found at a lower price.

Is that extra cash worth paying for the solar charge? It is something that depends entirely on the particular use of each one of you. In the case of the Fenix, I doubt it because the benefit is not too noticeable. We talk about extending 2 days in use of smart watch or 4 hours with use of GPS, that is not such a great deal.

The Instinct Solar is different. In this case the differences are greater, in fact 1TP10We could speak of this model as "Instinct 2" because of the other changes it receives.

The arrival of these models was quite obvious, I do not think it will surprise anyone. That they were going to be more expensive was also known to everyone, it was only necessary to extrapolate the price difference between the 6X Pro and the 6X Pro Solar to calculate the price of these new models.

However, the battery life achieved by the Instinct is more surprising, especially compared to the original model. Here we benefit not only from solar charging, but also from Sony GNSS chipset and the newest OHR sensor, both offer lower battery consumption.

Being able to say that the watch can always stay on, even if only in the power-saving mode (which basically is to show only the time), is an extremely important fact for this technology. It gives Garmin the ability to say that they have a watch that can simply be fed from the solar charge, even with conditions.

We shall not forget that solar charge and Power Glass came from last year's purchase of SunPartner Technologies, a French company dedicated precisely to solar technology.

So the "solarization" of the entire range has only just begun. At the moment it has been extended to the entire outdoor range -Fenix and Instinct-, but we can expect pod in the near future in other devices of the brand, both in watches and cyclocomputers. And you can already see that depending on the characteristics of the device it can go from being testimonial to quite important. Will we have a Garmin Edge on the horizon capable of always being charged?

And as for the surf features... they are fine, I guess. It's not a sport I practice so I won't be able to give you any more information, and with that... Thanks for reading! 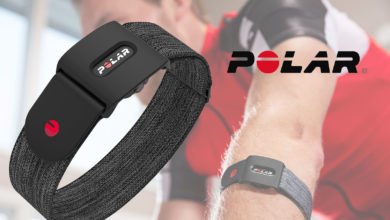