One of the questions I'm answering most often is about calorie count And not only different devices, but also within the same device as it is configured in one way or another when performing a given activity.

It causes quite a bit of confusion among all kinds of users, both new users who are starting their first device to follow a diet and get in shape, and advanced users with many years of training behind them who are trying to adjust their nutritional values in order to improve brands or eat correctly.

In the old days this was "simpler". I put it in quotation marks, because the estimation was done by eye, calculating that if we walk 10 minutes we burn 50 calories. But what about other sports? What if instead of walking, I jog? What if I run? What about swimming? What about petanque?

Obviously there are many different variables that can affect caloric intake. And besides, we don't all have the same metabolism. Two 30-year-old runners who run 10 kilometers for 45 minutes and measure and weigh the same don't have to have the same caloric intake. Maybe subject A has a slower metabolism. Or subject B has a greater muscle mass. Or simply has an accelerated metabolism at that very moment. It's a multitude of variables that can affect the calculation.

So with these premises what we athletes end up doing is monitoring the level of calories consumed (translating it into the amount of beer we can drink) with the different devices that technology puts at our disposal. But what many of you find is the lack of contrasting data. An activity recorded with a Garmin activity wristband will have different calorie data than you might have, for example, with a Polar watch. Many will even see how after synchronizing their last recorded workout with their Suunto watch, when synchronizing the activity with Strava the calories differ.

I will try to answer all your questions in the next five minutes you will spend reading this article, but the most important thing to remember, whatever the result and whatever device you get it through, is that it is a EstimatedA mathematical calculation based on more or less worked algorithms that will use a greater or lesser number of variables, depending on the complexity of the calculation and the number of data that count to make the calculation. The only way to know what our caloric consumption is is to perform a test in the laboratory, and even then I doubt very much that an appropriate level of precision can be achieved.

Finally, remember that you will find differences depending on the device and technology used. It is important that they are correctly configured (weight, height, age, etc), but there is no standard that establishes how the calories consumed should be calculated.

This is the most basic method the devices can use. There are not many variables that poder input into the algorithm beyond the weight and height of the individual in question. Due to the absence of heart rate data the device will provide "eyeball" data. That is, it may be true... or it may not, because there is no intensity data.

Not knowing what heart rate you're doing can't tell you how hard you're working to exercise. While walking may give you a pretty good idea, the problem comes with other types of exercise that are more difficult to quantify, such as a bike ride or yoga session.

This calculation method is used in the most basic mode of activity wristbands, both in GPS watches and in wristbands without an optical pulse sensor.

In order to solve those tremendously inaccurate data, the manufacturers develop their own mathematical algorithms (the case of Polar) or license the algorithm for its use to third companies that are dedicated to this type of studies (Garmin or Suunto, licensing Firstbeat technology in its first versions). In any case, everything remains in Finland, since both Polar and Firstbeat are Finnish companies. In case you thought that Finns only know how to develop saunas (and vodka).

An example of this type of calculation is the algorithm that Polar calls OwnCalIn addition to using the data seen in the previous method (sex, age, weight and height), they also use the heart rate data. After entering your maximum heart rate the device will be able to calculate the effort you are making while you are training.

Including more data in the calculation: oxygen consumption and pulse variability

We can still give the algorithm another twist by including more data. In addition to the generic data it includes other data obtained from the external pulse sensor. Not only pulse, it also evaluates the time between heartbeats (pulse variability or HRV) and estimates the metabolic equivalent which is what will ultimately determine the calorie consumption quite accurately. According to Firstbeat estimates, it has an error around 7-10%.

This estimation algorithm is the one you will find in some Garmin or from SuuntoIt also varies over time, since it uses the maximum oxygen consumption estimate (VO2Max) of each individual athlete, so as you progress in your workouts the algorithm is updated. All this is explained very well by Firstbeat in your own documentation (in English).

Why evaluate calorie consumption with indirect data (HR), if we have direct data (cycling power)?

And this is where another way of calculating the calories consumed comes in, precisely the most exact one, at least when cycling, because by being able to directly measure the power you are pedalling with, you can find out very precisely what the energy consumption you are having is.

To see it clearly, imagine that you finish climbing a mountain pass and begin the descent, but without pedaling. The heart rate will still be high because the effort is still very recent, but you are letting yourself fall down a hill without any effort (and little energy consumption). With the calculation methods seen above, the device would count the caloric consumption due to the high heart rate. But being able to evaluate the power with which you are pedaling (which in this case is 0), it will not assign you caloric expenditure when it does not exist.

It is the most accurate way to measure power consumption without going into the laboratory. But it has two problems: a power meter is not cheap, and its use is only contemplated in cycling. Although there is power measurement in racing (Stryd), is too new a technology to be able to correctly assess the results obtained.

Finally, we must not forget that activity bracelets not only count the calories we consume while exercising, but also take into account the basal metabolism, that is, the minimum energy we need to stay alive. Because even if you think not, lying on the couch watching TV also has an energy expenditure, because even if you are being tremendously lazy your whole body is in full activity (breathing, organs working, etc).

It depends on a multitude of factors: sex, height, age, weight, muscle mass... So when you see on your device's screen or in your daily activity summary that you have consumed a total of 2,000 calories without getting out of bed, don't be surprised. You are simply alive.

You know that a picture is worth a thousand words (and I've already exceeded those 1000 words, it's time to put pictures). Let's go to a case study where you can see that the calculation of calories is anything but exact and depends mainly on the amount of data we can provide. A long trail race and many meters accumulated.

We have two Suunto units and one Garmin unit. All three watches use the Firstbeat calorie consumption estimation algorithm. With all three I have done the same activity and the height and weight parameters set in the profiles are the same (well, I have 700 grams difference between the Suunto profile and the Garmin profile). One of them has no heart rate data and the other two use only one ANT+/Bluetooth pulse sensor (so the recorded heart rate is exactly the same). And in case the algorithm takes into account the slopes as well, both watches paired with the pulse sensor have a barometric altimeter, so the climb and descent profile is also identical. The distances measured by GPS are also practically identical, varying from 15.38 km in the shortest model to 15.61 km in the longest model.

So, on paper we have absolute equality. And if calorie estimation were an exact science the result should be the same in all three cases, with minimal differences. So here you can see the result. 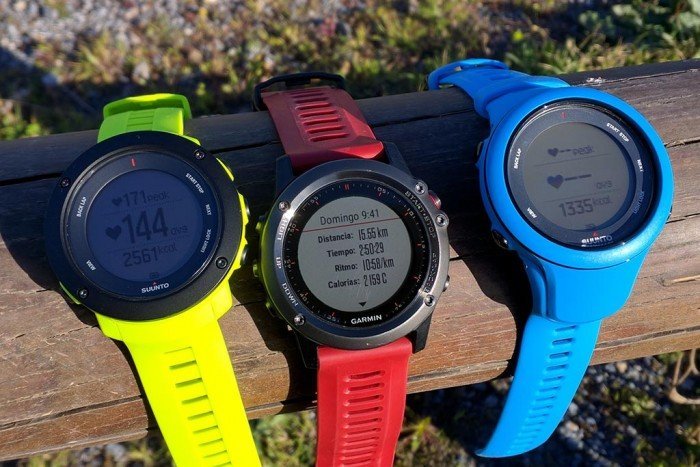 First, the Suunto Ambit3 Sport (blue color) counts only 1,335 calories, far behind the other two. The reason is simple, it is not connected to the heart rate sensor, so it cannot introduce the variable of effort into the equation. So it is clear that the slope or altitude profile has not been used at all and has simply done the "old fashioned math": X distance at Y pace equals Z calories. That's it, the calculation is finished, so let's get out of here.

But if you've followed me here in everything I've explained, you'll know that the estimation is much more complex. Without heart rate data, more than an estimate, it's a mere assumption. But we still have two clocks that theoretically use the same algorithm and have counted the same data, but there's a significant difference of about 15%. Why? I can think of two reasons:

And as a curiosity, when synchronizing the activity with Strava it does not use the recorded data but uses its own algorithm, giving a total of 2,421 calories consumed in that activity.

And who should we believe? Obviously, not the data from Ambit3 Sport, because without heart rate data it has no information on the effort needed to cover the distance. Of the other two results (three, if we count Strava's) we could draw lots, because honestly, there is no way of knowing which one is right in its estimate.

As you can see there are many ways to calculate the calories consumed, and the accuracy of the calculation will depend mainly on the number of variables that the device can take into account, although above all, it depends on who developed the calculation algorithm.

For example, there are many mobile applications that offer features similar to those of the activity bracelets, basing their calculation on the internal accelerometer of your smartphone. But without knowing who developed the equation and where the data comes from, we can't be too confident either.

Everyone who is concerned about the number of calories they are consuming does so to compensate for their diet. Most often we do so to lose weight by dieting, but there are many other sportspeople for whom precisely this weight loss is what they want to avoid. And not only that, but also to introduce the body to the calories you are consuming in a competition or long-term training, beyond reaching the next refreshment station and gorging yourself on everything you can get your hands on.

So it's important that whatever your case, you know where those calories come from that your device says you've consumed and you can assess globally whether you should believe what you see on the screen and adjust your nutrition based on that data. 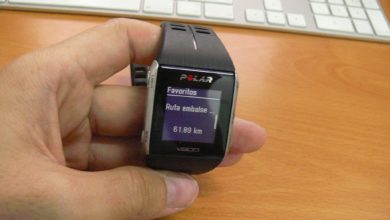 How the barometric altimeter works 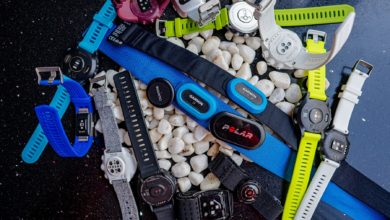 How heart rate monitor works and what's best for you