The Garmin Forerunner 935 is Best Training Device of 2017Not that I'm saying it, but that's what you've decided with your vows. Congratulations to Garmin! winner of the Camelbak Circuit draw(which should already be in possession of the hydration vest).

But this is not only about rewarding the one who has come out on top, but also about analyzing the overall votes and navigating the data a bit, because... who doesn't like to dig around when there are figures involved?

This is the final classification, seen graphically to obtain clear references (click on the image to see it bigger).

And of course the number of votes per unit for each device, which will give you an idea of the different magnitudes. 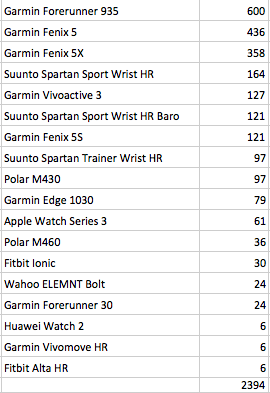 There is a lot to analyze and this data makes quite a few headlines.

The Garmin FR935 won by 164 votes over the second place (its "cousin" the Fenix 5). A pretty clear victory, considering also that one out of four votes you have sent has been for the Garmin triathlon watch.

You may be thinking that 935 has won because the Fenix 5 range appears separately. But there are so many differences between them that I can't count them together. A Fenix 5 and Fenix 5S are intended for different users. What's more, not even if we add up the votes of the Fenix 5 and Fenix 5S (whose only difference is the size) would reach the figure of 935 votes. And of course the Fenix 5X can't enter the same equation because it's a totally different animal.

From these same votes there are more readings to be made. Like choosing the Forerunner 935 over the Fenix 5, taking into account the use of nobler materials by the Fenix. It's a trend that is changing, because the usual thing would be that when faced with the same performance the clear choice would be the model with better materials. But there is another fundamental point as it is the weight of the watch. I'm not only talking about comfort on the wrist, but mainly effectiveness for the optical pulse sensor.


Integrated mapping is a service demanded by the public

As far as the Fenix range is concerned, you generally prefer the normal model and something smaller instead of the additional features of the 5X, so again size is decisive. Even so, almost 15% of the voters have opted for the only watch with integrated maps . That serves as a warning to the rest of the manufacturers in the sector. It is clear that there is a market and that a relatively important percentage of the users believe that it is a very interesting function.

The sales price is a decisive factor, but it is not everything

It is clear that the sales price is a determining factor in the choice of a watch by the general public, but it is not the only thing that is valued when choosing a certain model. This is what can be extracted from the votes received by the three Spartan models that have been presented this year.

Even so, the model without an altimeter has been left above. Will the price be the one that makes more people choose the first one as the most interesting model?

But we can't say that this is the most important aspect, because the Spartan Trainer has been left behind the other two models. And why is this, if the software features are the same in the Spartan Sport and the Spartan Trainer? Because although the Spartan Trainer is a real ball in terms of quality/price ratio, the user doesn't mind spending a little more if he gets better materials and higher quality construction. And in the case of the Spartan, the qualitative leap is important.

So the buyer looks at the price tag, but necessarily chooses the option with the lowest price tag.

There is still not full confidence in the sports use of smart watches. Or a second reading: range is one of the aspects most valued by those who use their watch for sports.

In the particular war between the four main smartwatches presented this year, the Vivoactive 3 has been left ahead of the game, because when the user profile is as marked as the type of reader that enters this page, the battery life is well above other features.

I'm sure this same survey published on a more generic page would have offered the results in reverse: Apple Watch first, followed by Huawei Watch 2, Fitbit Ionic and Garmin Vivoactive 3 far behind.

But when we think of a watch, the most important thing is still the sporting aspect, and although other features are becoming more and more important, autonomy and sporting performance are what the most demanding sports wearer needs.

Activity bracelets have an uncertain future

It is clear that the harassment of products from Asia is important and it is a market that is already playing almost exclusively on costs. We have already seen this a couple of days ago with the presentation of the new Garmin bracelet, being forced to increase performance and reduce the price of its new model.

But this is not the only reason. The simplest activity monitors were all the rage about 5 years ago and today it is a highly exploited market with little interest from the public, partly because of the few possibilities for improvement it offers. The average user of this type of device does not demand many features, and we have already seen that manufacturers who have tried to offer "something more" have not obtained the expected response. A clear example is TomTom with its Touch modelThis has been a major sales failure despite offering a feature that no one else was offering.

These are the main headlines I have drawn from the figures collected, I do not know if you will draw any more. If so, you know, here below you have the comments.

But you know what's great about this? 2018 is just around the corner and it promises to be packed with equally interesting news, and I'll be here to keep you informed.

Thank you to those who participated in the voting and congratulations again to the winner of the draw. Next year we repeat. 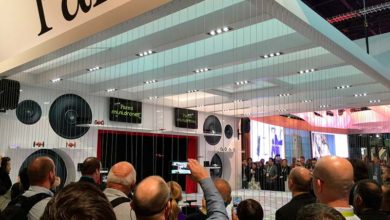