Favero has been announcing the firmware update of its pedals for several months Assioma to include cycling dynamics, and yesterday it finally became a reality. Version 4.04 announced yesterday offers BTI Cycling Dynamics and incorporates almost all the possibilities that the ANT+ profile allows, leaving out the one that is perhaps easiest to understand for all users... but more about that later.

If you like, I'll start at the beginning, telling you where all this comes from.

Cycling dynamics originally came from Garmin - you have to go back to 2014 to find the first reference for Garmin Cycling Dynamics.

Initially, it was one of the differentiating factors of the Garmin Vector pedals. It did not come along with the pedals, but was added later through an upgrade.

Garmin Cycling Dynamics was exclusive to the American brand's pedals (and cycle computers) for several years until, in 2017, Dynastream (responsible for the ANT+ protocol) announced that it would incorporate these profiles as a standard protocol for ANT+. The fact that Garmin is Dynastream's parent company is an important detail...

So ANT+ was openly receiving the communication protocol that Garmin had designed a few years earlier. What did this mean? It meant that any manufacturer that was a member of ANT+ (i.e. all major manufacturers) could incorporate these cycling dynamics protocols into any of their devices. Everything was perfectly documented so that any manufacturer could adopt it.

By devices I mean any device, not exclusively potentiometersThis therefore also includes cycling computersBut the truth is that despite this possibility, no one has ever used it until today.

You know where all this comes from, now you need to know what is added to your Assioma potentiometer. Until now we already had a lot of information beyond the power you were developing. This is the most important data you will want to see on your computer screen, but there are a few more that make more sense when you analyze the activity later.

All these metrics were already present in the Favero Assioma and we could see them both on the Garmin screen and after the training synchronisation.

If you remember the beginning of the article I told you that the cycling dynamics allowed to add three additional metrics; there is one that Favero has not wanted or been able to use; either because he does not find it useful -I doubt it- or because with its current design it cannot offer accurate data -more feasible-.

This is a deviation from the centre of the surface, which in plain words would indicate at which point of the pedal our foot exerts more pressure, whether to the left or the right. It would serve to help us place the cleats correctly in the centre of the shoe to ensure more uniform power transmission to the pedal.

The pedal hardware itself may not support being able to correctly identify if we are applying force.

Which devices can you use to capture the new cycling metrics offered by Favero? Well, only new units, because although the cycling dynamics have remained the same for almost 5 years, the code has changed in this time so the ANT+ protocol has been updated.

These are the compatible devices:

The most notable absence is undoubtedly the Edge 520. As I said, it is not a problem of Favero, who have simply implemented the ANT+ standard, but Garmin has not updated the Edge 520 firmware to that standard.

Why are there no cycling computers from other manufacturers such as Wahoo? Because they have not wanted to adapt it, because they are quite free to do so.

You already know what new data you can collect and on what devices you can get it, but now you need to know how you can implement it in your training.

The answer is that there is no clear direct benefit from them. It is not something that allows you to say "do this and you will automatically gain 20W". So far no one has come up with interesting ideas on what to do with this data, not even Garmin.

About the power phase, I suppose that unless we see very strange things (like the main phase being at the top of the pedaling or similar), there is not much we can do. Maybe a biomechanic can give you advice on how to improve the pedaling, but I don't think that is a fact that can help you immediately beyond checking that you don't do anything exaggeratedly wrong. 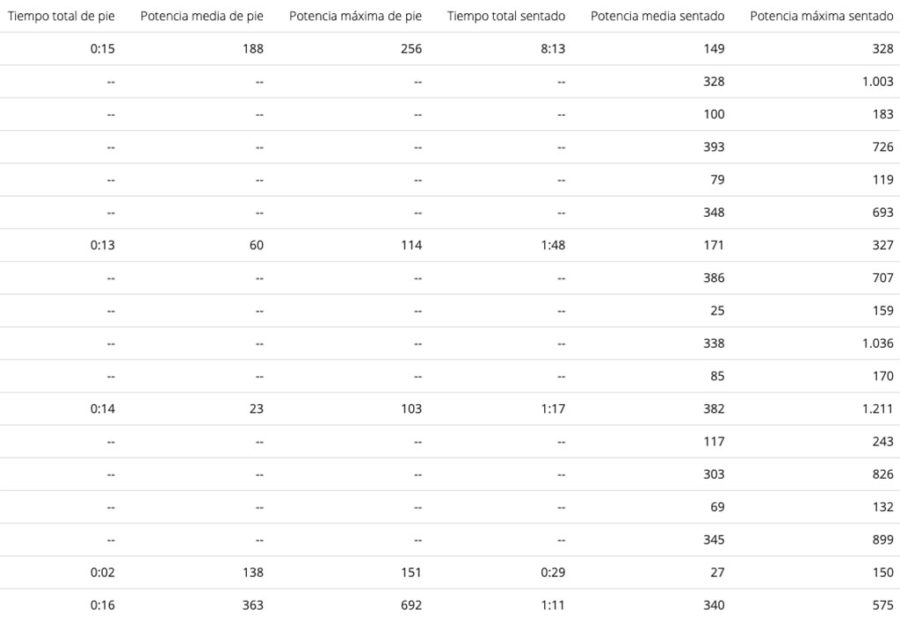 There are several laps that don't have separate times recorded, I guess it's because the laps are too short (it's a series practice with the bike) and Garmin needs a minimum duration to be able to provide data.

In any case, if you want to fiddle around a bit and pry, I leave this training to you I did yesterday after I upgraded the pedals to this version of the firmware.

It is clear that this is not a data that makes the Assioma much better, but it is one more sales argument that Favero can use in their favour. It was one of the aspects that differentiated the Assioma from the Garmin Vector 3 (apart from the design and the fact that the Garmin pedal has the gauge integrated in the body of the pedal), the price difference is now noticeable in favour of the Favero.

If you want to buy the Favero Assioma at a good price here is a good option, with a reduced price. There are two versions available, the UNO that measures the power only on the left side (and doubles it) or the DUO, with independent measurement on both legs.

It is true that if you buy the ONE and later you want to move to measuring both sides you can do so, but my recommendation is that you buy the DUO directly. As you have seen before, the balance is not always 50-50, and can vary throughout the training or competition, so if you want to train and compete for power it is much better to have the real thing than to double the power by two.