Following to the review I published a few days ago of the Addsfit Elite, now it's time to look at the Addsfit Mini Pro, the second of the new models that the manufacturer has launched to accompany its two massage guns that were already on the market: the original Addsfit Max and the Addsfit Mini.

I consider Addsfit a brand that is placed on the sweet spot within the massage gun market, within the different products of this type that I have tried so far. It doesn't have the premium product “aura” that Theragun have (it doesn't have its price either), but it's also not a cheap 20€ massage gun. I think they are at the right spot between what I consider a good investment but not exceeding with a high outlay.

If it is your first approach to the world of massage guns I recommend you to take a look at that first review where I stopped a lot more on the how they work, what benefits does them offer and features that you should take into account, along with the explanation of what to consider with each of those benefits.

But leaving presentations aside, let's go full with the Addsfit Mini Pro, the last of the models that needed an in-depth review. 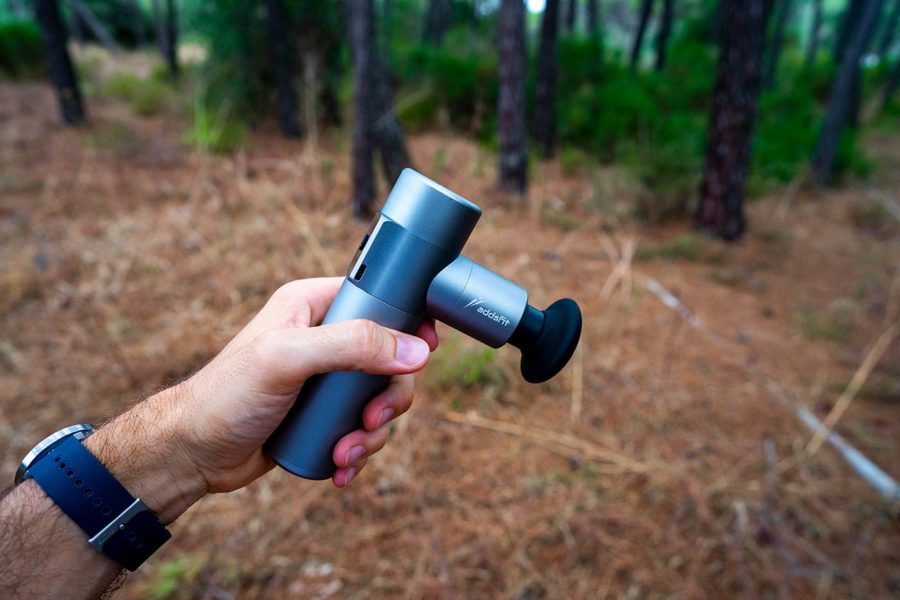 Not the top of the range of the brand. It is even the one that offers the least percussion depth. However, it is the one I like the most in the Addsfit catalogue because of the commitment it has in all aspects.

User Rating: Be the first one !

As with the Addsfit Elite, the Addsfit Mini Pro carrying bag solves my main complaint regarding the Addsfit Max. The pouch supports the gun with the adapter mounted on the gun itself, so starting using it is faster as the heads are mounted very quickly on the adapter. We have the same heads available as in the Addsfit Elite. Four of them made of silicone, with a very pleasant touch, and a fifth that is a rigid foam ball. If you use the ball, you will have to remove the adapter from the gun, because it is a single piece while the silicone heads are placed on the adapter that is housed inside the Addsfit. 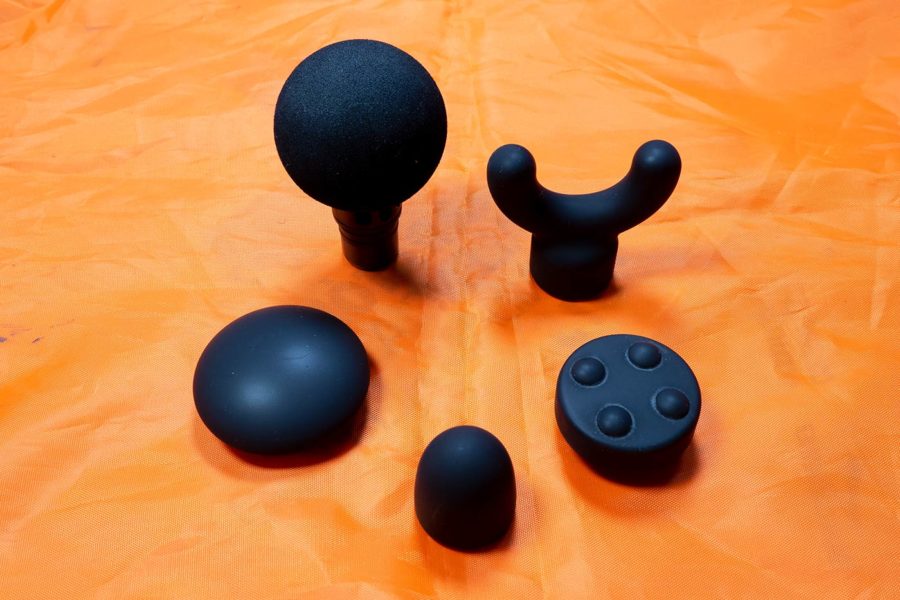 Are we talking about the specifications of the Addsfit Mini Pro? The first thing to note is that it also has a pressure sensor, the new feature that Addsfit has presented in its new massage guns. This sensor simplifies the massage procedure and speed choice a lot, but I'll tell you about that later in its specific section because, as this is the most prominent function, it's worth talking about it carefully.

The battery is 2,600mAh and allows up to 10 hours of continuous use. 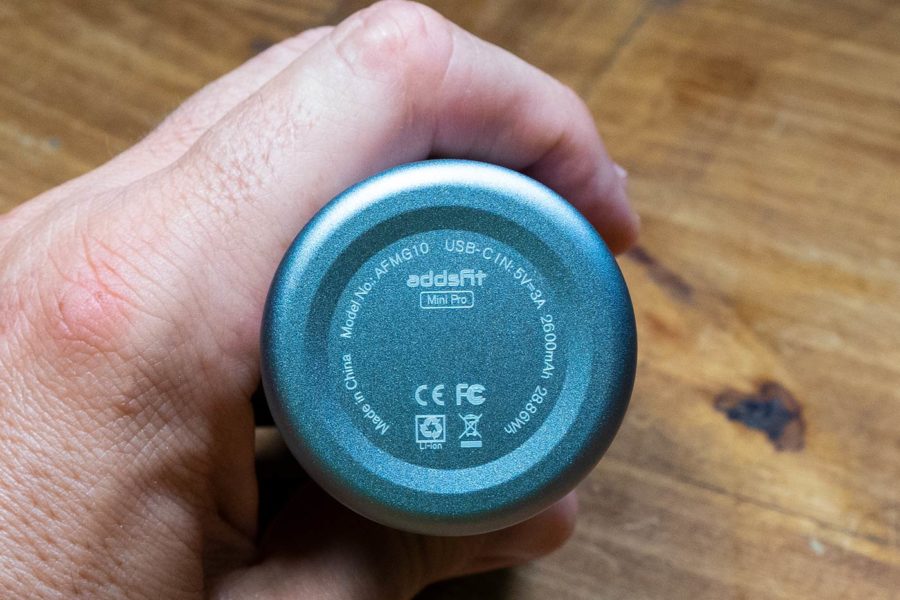 We don't need any specific charger, unlike the Addsfit Max, as it charges via USB-C. It's a huge plus because first, we don't have to take the charger everywhere, and secondly because you're probably already using that charger for any other device at home. 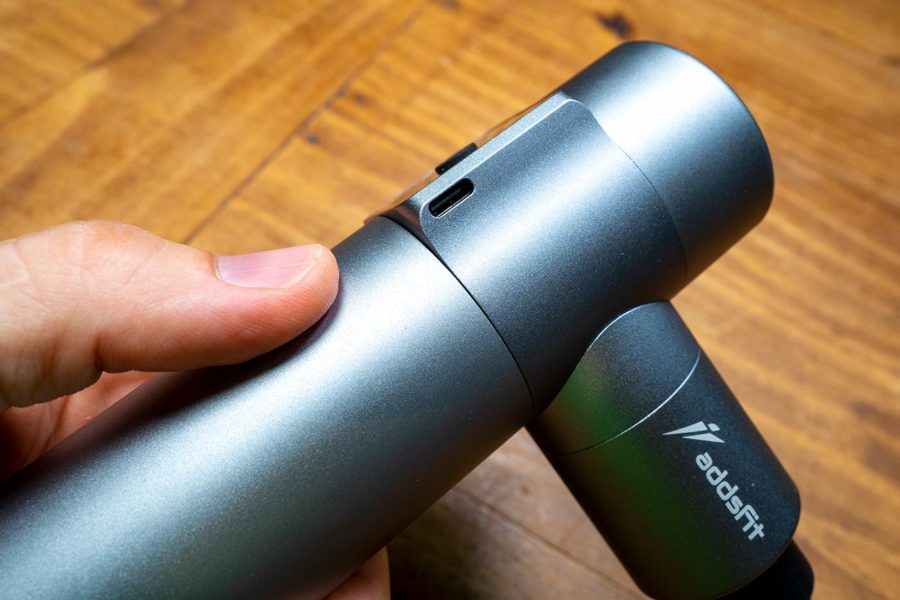 Another feature of the Addsfit Mini Pro is that the handle is extensible, something you can't see at first glance. Although the gun is made entirely of aluminum, we can extend it to reach further areas. For example, for a massage in the lower back.

The solution is ingenious, because to extend the handle we simply have to turn the bottom. And when you want to shorten again, turn in the opposite direction. It's that simple.

This is the most interesting feature present in this new model. Until now the speed regulation was manual, having to make the selection depending on what we were interested in massaging. But if we're massaging an area and want to locate at a specific point by increasing speed, we would have to change the speed manually.

This is what comes to solve the pressure sensor, detecting when we are pressing more intensely (for example, to treat the area of a knot) and automatically increasing the speed.

Imagine that you are massaging the femoral rectum and want to affect somewhere on the vast side. By simply increasing the pressure exerted from the gun on the leg, the speed will increase automatically, thereby intensifying the punctual massage.

As soon as you release the pressure from the area, the massage gun will return to the normal speed you had previously selected.

Although this is not the top end model within Addsfit products, the Mini Pro is the massage gun I like the most. Even though it's the one with the least percussion depth (10mm by 12mm offered by the rest of the range).

The reason is none other than the number of ingenious proposals it offers. It is a small and lightweight massage gun, the extensible handle gives you that extra comfort that its size could affect, the pressure sensor is a fantastic solution and as in all other products from the brand, the build quality is high.

The addition of the pressure sensor is a very favourable aspect because it simplifies the management of the massage we are applying by not having to manually change the speeds. It is really comfortable to start at a low speed and, when we want to impact on a particular area, press with the gun to increase the speed of massage (and logically the pressure exerted by ourselves).

In terms of perceived noise it is slightly lower than in the case of the Addsfit Elite, but it has the same strength with 28.6lbs and less speed in terms of massage.

As I said, within the Addsfit product range if I have to stay with one it would definitely be this Addsfit Mini Pro, because its only negative point is that the percussion depth is slightly lower than the others, but the truth is that it is not something I have perceived during the massage. Fitbit Flex 2, Fitbit's thinnest bracelet, and the only one that can withstand water | Analysis